Over the past week or so, I’ve worked my way through the Godfather trilogy during my evening exercise. Because what better way to get your blood pumping than with deliberately paced, four-hour-long movies about politics and betrayal! Well, I joke, but the fact is that even though I’d seen the movie before, the scene from the first movie where Michael performs the restaurant hit had my heart racing. Really intense stuff. It’s a shame the other two movies weren’t quite as good. 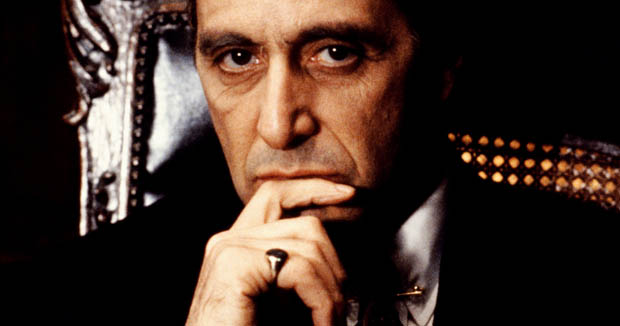 Don’t give me that look, Michael. You know it’s true. The second movie needed a little trimming, and the final flashback sequence was entirely too on-the-nose (hey guys, did you know Michael doesn’t value family as much as his father did? In case you were weren’t sure after he had both his brother and brother-in-law assassinated!).

As for the third movie… well, actually, I’d never seen it before, and it was nowhere near as terrible as I’d been led to believe. In fact, it was about 90% excellent, marred only by a completely inane ending (“Here’s three hours of film culminating in a tightly scripted, operative tragedy. P.S., Michael died 20 years later.”) and a poor choice of supporting actress. Enough has been said about Sophia Coppola’s performance that I needn’t belabor the point, but her talents definitely reside on the other side of the camera. I didn’t realize until reading up on the movie after finishing it that she was a last-minute replacement for Winona Ryder. What could have been; that would have worked out to such a better film, it’s kind of heartbreaking. Instead, we got… well, what was that? It was like someone had digitally inserted a performance from one of the Star Wars prequels into a Godfather film.

Come to think of it, Francis Ford Coppola and George Lucas are good friends. Something to consider.