Atlus never ceases to surprise me. They’re actually publishing the PSP version of Persona 2 (well, the first half — Innocent Sin) here in the U.S., even though Sony itself appears to have given up on the idea of making money on PSP software and is currently in the midst of remastering the platform’s library for PlayStation 3. 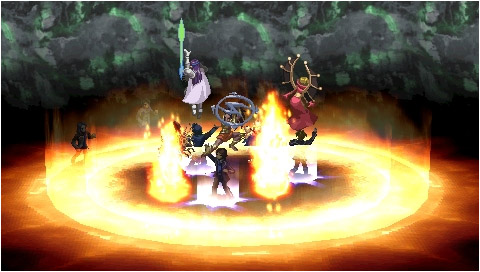 Innocent Sin, by most accounts, failed to make it to the U.S. strictly because Atlus of Olde was afraid to publish a game in which (spoiler, I guess) Adolf Hitler showed up as a villain. That weird old thing where video game publishers were happy to let you wantonly slaughter humans by the thousands, but take down the most reviled man of the 20th century and suddenly oh no too delicate a subject for this precious young medium to handle. I’ve seen screens of how this particular bad guy is being presented in the Japanese version (he’s wearing sunglasses to hide his identity, a particularly clever disguise!); this doesn’t guarantee he’ll show up in the U.S. version, though. I kind of figure he will. If the past decade’s glut of WWII-based shooters has accomplished anything, it’s making the world less shy about ramming bayonets into the tender belly parts of Nazis. Whether that’s a good or bad thing is a call best left to the reader, but at least it means we probably won’t have to listen to the strident complaints of so-called “purists” sulking about censorship in their incredibly artistic stories about magical school kids who can summon ancient gods to beat up monsters for them.

Anyway, gird your loins and whet your appetite for Hitler destruction. I’m going to insist you buy a copy of this game so that when Atlus publishes the other half of Persona 2, Eternal Punishment, on PSP we’ll get that one localized, too.

Sharp-eyed readers may have noticed that the viral pre-announcement Atlus released last week for Innocent Sin included a passing mention of Tail Concerto as well. I don’t take that to mean they’re intending to localize its sequel Solatorobo, though; rather, I read it as an act of wanton cruelty as they string us along with empty teases.

12 thoughts on “Tsumi (to batsu, hopefully)”