Sony (or Capcom, or someone) announced today that the PlayStation 3 will be playing host to “remastered” PSP games up-rezzed into high-definition, a bit of news that has me torn. On one hand, it’s nice that Monster Hunter Portable 3rd will probably be making its way to the U.S. now (since Capcom USA has all but said point-blank that it won’t be coming over here on PSP). On the other hand, it’s not really Monster Hunter Portable 3rd if it’s on PS3, now, is it? 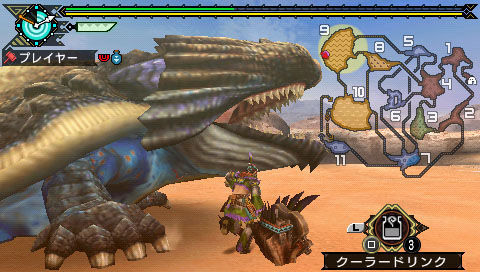 I feel like the PSP, for all its shortcomings, has helped instigate a slow but welcome shift in portable game design thinking. After all these years, developers are beginning to make more and more portable games that exist in their own right: Playing to the strengths of mobile play, throwing aside the standards of console design, and boasting respectably deep and substantial content despite running on relatively modest hardware. But while the likes of MHP3, Crisis Core, and Peace Walker are wonderful on PSP, I worry that they’re going to feel dull, repetitive, and underwhelming on a high-definition console.

I suppose the idea behind the HD PSP games is to entice western and Japanese audiences into changing their playing habits somewhat: Americans and Europeans eschew the PSP, and Japanese gamers tend to ignore PS3. The ideal result of this switch-over would be westerners playing PSP titles they’d normally ignore as their Japanese counterparts revisit portable favorites on their neglected consoles.

On the other hand, it could just result in a bunch of games that look underwhelming and play awkwardly next to their proper console counterparts and everyone will be sad and lose money. But maybe that’s just my pro-portable bias speaking.