Someday — maybe later this year, maybe sometime after that — Cat and I plan to move to New York City, since that’s where she’s from, and 1UP could use a presence on the east coast. I’m pretty excited about the prospect, but I will definitely miss many things about San Francisco. The image below encapsulates several of them all at once: 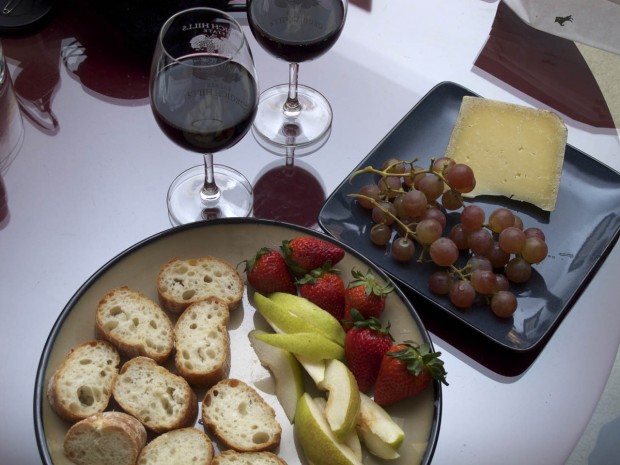 I didn’t really appreciate the amazing quality of California fruit until last summer when I began eating healthier, lighter dinners like this (which fed both of us). The fruit on this plate was fresh, sweet, flavorful, and perfectly textured. It was also crazy cheap now that it’s spring and the fruit is in season: the Asian pear cost fifty cents, the grapes were probably about 75 cents, and the strawberries were one dollar per pound. A dollar for a pound of fresh, bright, delicious strawberries! That is ridiculous. And the bread (from Semifreddi’s, a local bakery) was really good, too.

And then there’s the cheese. Cat’s cousin was in town last weekend and wanted us to take her to Cowgirl Creamery, a local gourmet cheese shop. By way of thanks, she bought us a couple of cheeses. This particular variety is called Mezzo Seco, which is a hard, smoked, Spanish, sheep’s milk cheese. It is kind of awesome and tastes wonderful.

And, oh yeah, the wine. I will especially miss the fact that it’s practically impossible to find bad wine here. I mean, sure, if you go someplace where the house wine is Sutter Home you’ll regret it. But just about any decent restaurant in this area will have an expansive selection of high-quality wines, and even the cheap stuff will almost certainly be good. NYC restaurants offer no such guarantees, which is fine if you like quaffing vinegar but otherwise requires caution.

The only way this meal could have been better is if figs and mangos were in season! But that will come to pass, and hopefully before we depart for faraway lands. NYC has plenty of charms, but the ability to cobble together a European-style meal like this, brimming with amazing fruit and delicious Napa wine and fresh-baked bread, all for a few bucks, while strolling through the local Asian markets… that’s something I’ll miss.

14 thoughts on “BakeSpite: Spring has sprung”