Sorry, video game people, but after writing something like 10,000 words about 3DS and PlayStation over the past few days, I need to write about something else. So I’m going to write about food some more. Except this time, it’s not going to be a lazy exercise in making fun of a grotesque mockery of ice cream from a lame-duck target like McDonald’s, but rather a frivolous exercise in talking about delicious home-made things. Specifically, the Boeuf Bourguignon that Cat and I (mostly Cat) recently made.

NB: Not having much interest in or love for French, I find “Boeuf Bourguignon” particularly toilsome to type out. Henceforth, it shall be known as BB.

Like a lot of stupid poseur Americans, I first took an interest in BB after watching Amy Adams burn the living hell out of a batch in 2009’s Julie & Julia, a charming little film that couched the fascinating life of Julia Child in terms that obnoxious Internet losers like me can relate to, i.e. as reflected in the musings of a self-absorbed blogger. So Cat (who actually has a genuine interest in food and cooking from child times) decided to try her hand at making BB for New Year’s Day 2010. It was delicious, but she was disappointed in how dry the meat turned out and considered it a failure. But, more than a year later, she finally decided to try again. 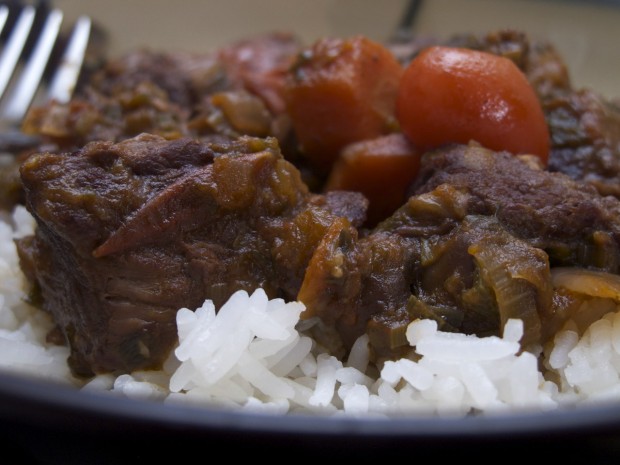 The above is the finished product. Oh god spoilers.

Now, I have never eaten BB outside of what I’ve helped Cat make, but honestly I have a hard time imagining it coming out much better than this dish did. It was pretty close to perfect, and I’m a dude who doesn’t even particularly care for beef. 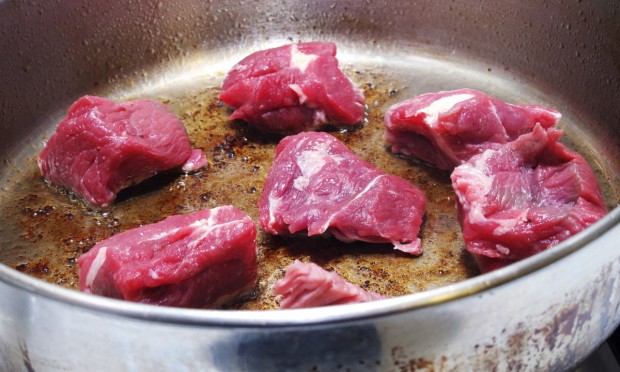 The problem with the first batch, Cat decided, was that she hadn’t properly seared the beef, and so most of the moisture seeped out into the sauce. This time, we began by pan-searing the meat with all seriousness. No seepage this time. Honestly, I don’t even want to think of the words “seep” and “meat” in close proximity to one another. None of that. These meat pieces fried up to be seep-proof. 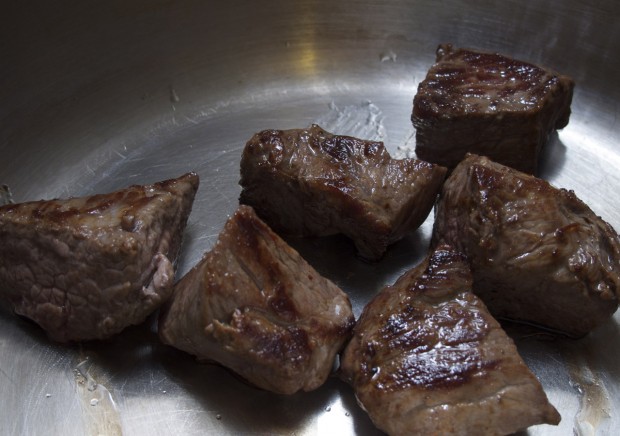 This is the seared-up meat, all perfectly browned and slightly crisp on the outside, but not quite cooked through. In other words, still full of juices, but highly seep-resistant. 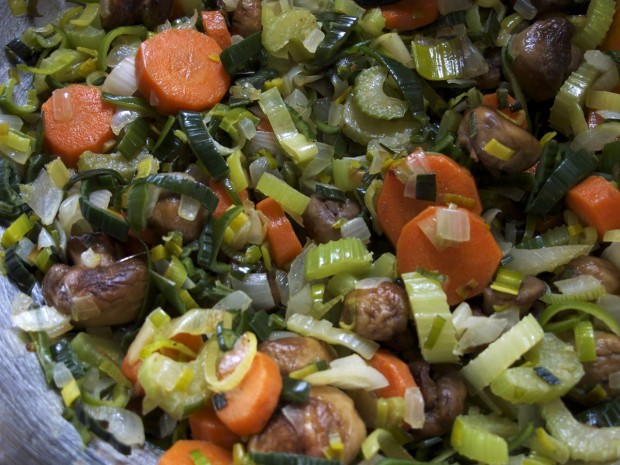 BB is not only about beef! It is also about other things to be eaten within the sauce that the beef stews in. In this case, that’s white onion, carrots, celery, mushrooms, and… I don’t remember what else. Leeks, maybe? In any case, we tossed them all together on top of the beef, which as of the previous photograph had been transferred to a separate pan. 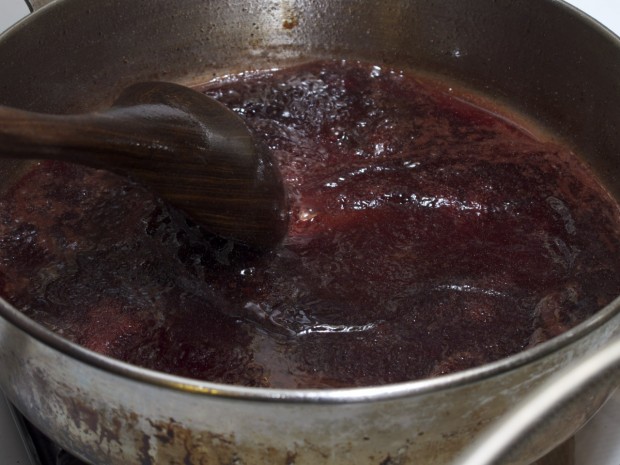 The most important part of BB, aside from perhaps the beef, is the wine. That’s the “Bouguignon” part of the dish — proper BB, I read in my research, is made with wine grown in the Burgundy region of France. Unfortunately, our local snooty, overpriced grocery story for yuppies (sadly, the only grocery store in our neighborhood that doesn’t stock exclusively Asian food or have mice running freely along the shelves of the produce section) offers only a single variety of genuine Burgundy wine, and it ain’t cheap. We couldn’t bring ourselves to drop fifty bucks on a bottle of wine just to simmer it away.

Maybe that makes us heathens, but mostly I think it makes us desperately short on cash. We went instead with a decent but reasonably priced Pinot noir, which seemed a decent enough substitute given that Pinot noir is one of the primary varietals grown in Burgundy. Look, I can’t afford to spend fifty bucks for a week’s worth of food, let alone for a single component for a single dish. You are not allowed to judge us.

Anyway, looking at this photo of Pinot noir simmering in a pan full of beef fat has reminded me that we’ve accumulated more wine than we currently have room for on our wine rack and that it would be a good idea for me to help thin the stock a bit tonight. Yes. 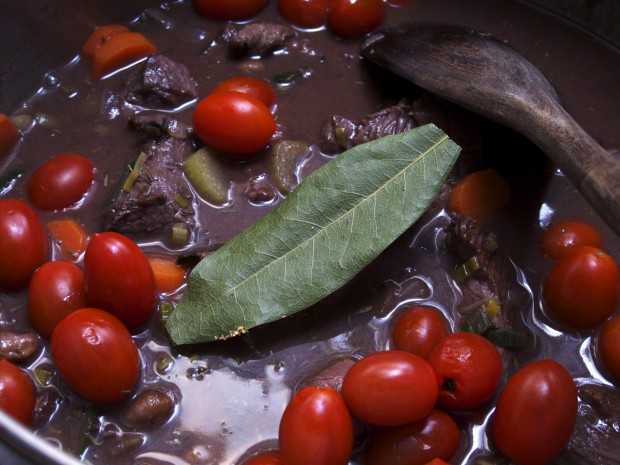 Here the wine is added to the main pot, along with beef and chicken stock, the prepared vegetables, the seared beef, and a bunch of grape tomatoes, and one bay leaf. I secretly think the tomatoes may have been the best part of the entire meal: Their skins were just thick enough to keep them from splitting open and disintegrating into the sauce, but not enough to keep the wine out. So they turned into these wonderful little balls of flavor, hot and slightly acidic with both the natural sweetness of the tomato and the tartness of the wine. You’d bite into one and it would burst in your mouth with a complex flavor that perfectly complemented the richness of the rest of the dish. So good. I would eat a bowl of these tomatoes… and I’m a dude who doesn’t really care for most tomatoes, too. 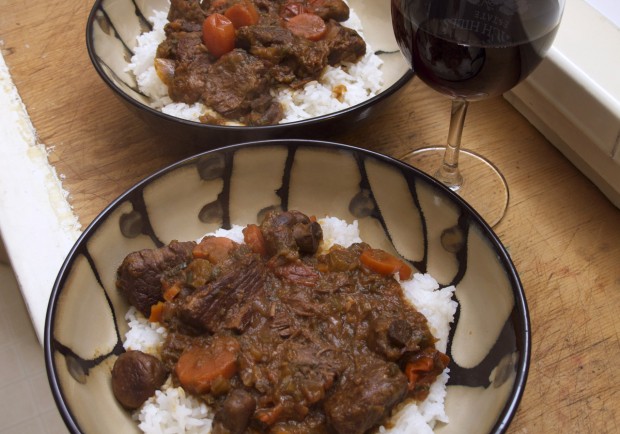 I wish it were possible to take photos of brown sauces and not have them look kind of disgusting, but so it goes. You’ll just have to take my word on how delicious this was. And yeah, we cracked open another bottle of wine (a Cabernet this time), because how pointless would it be to have Boeuf Bourguignon without wine? Totally pointless, that’s how pointless.

I’m not sure how the French usually serve BB — maybe with bread? Like, French bread? We went with jasmine rice, because it seemed like a good match. And also because Cat’s Vietnamese, and eating rice with a meal is sort of built into her on a genetic level. Making rice isn’t, though; I’m the one who prepares the rice when we cook. She taught me how, but the student quickly surpassed the master. I’d say “That’s teamwork!” but I think I just have an affinity for white things.

Well, maybe not for The Dave Matthews Band. Some things are just too white.