Project 365 #5: Blow out the candles and have a piece of cake

My commitment to an hour of gaming each day has held up so far. I haven’t been so good at sticking to just one game at a time, though; as I mentioned on Twitter, I’m something of a poly-game-ist — a pun so terrible no one even replied. Shucks. I’ve been plugging away at Curse of the Crescent Isle a little bit at a time, and I’m enjoying it, but I admit it’s better in small pieces. As fun and inventive as it is, the game has enough quirks and glitches to be frustrating in large doses. Also, my Xbox 360 hard drive ended up crammed to capacity last night, so the game was seriously stuttering and choking until I figured out what was going on — no fault of the game, of course. I blame Crackdown 2 for eating up a sixth of my drive’s space on a game that was basically just Crackdown, except crappy. On the whole, I’d rather play Crescent Isle. Guess that makes it easier to decide which one gets deleted! 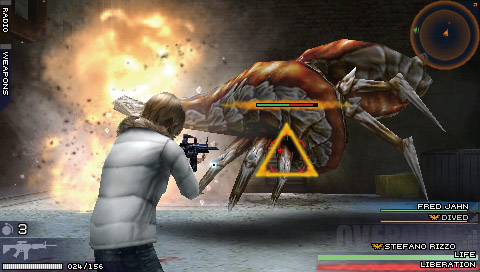 I’ve been playing more of The 3rd Birthday in the meantime. It’s supposedly a 10-12 hour game, and I have seven hours on my clock. So I should be about halfway through it, right? Well, no; I’m not even finished with the second of six episodes. I replayed the first mission in several different permutations in order to better grok things like Overdive Kills, weapon customization, the Over Energy system, and the in-game achievements for the sake of my 1UP preview.

Funnily enough, now that I’ve moved along and made significant progress in the second mission, I’m enjoying the game a lot more. I’ve gotten a feel for the flow of combat, the process of taking down enemies with OD Kills (when you see the triangle in the image above, that is your cue to blow up a monster with the power of your brain), the way to game Aya’s special powers by combining mutant DNA, and so on. I’m annoyed by the fanservice, the camera is pretty bad, and I wish the shooting mechanics were more complex — but it’s shaping up to be a much better game than I had originally thought.

Square cheated a little with the second mission, though. The combat scene music is a new rendition of the battle theme from the original Parasite Eve. How could I not love that? 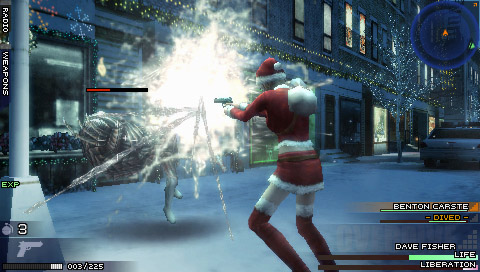 And no, I still haven’t unlocked Aya’s Santa costume. Or any other silly costume, for that matter. I am OK with that.