You’ll be happy to know that I’ve taken everyone’s netbook advice into consideration, thought carefully about what to do to gain access to classic PC titles, and have come to a monumental decision: skip the netbook and buy a 1TB drive for my laptop for a dual installation of OS X and Windows. Not that I’ll likely boot into Windows very often, since I always have half a dozen articles and InDesign files open at any given time and hate to disrupt my work flow, but at least I will have the option. And a new drive works out to be about 1/3 the cost of a decent netbook while taking up a lot less space, so it’s the better solution all around.

Wait, what’s that? You’re not happy to know that? You… you don’t care at all? Oh. I have grievously miscalculated. Alas. 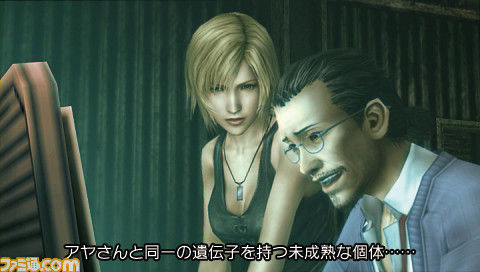 On to another note, then. Yesterday, Famitsu released a few new screens of The 3rd Birthday, and I have very mixed feelings about what I’ve seen. The screen above makes me super happy, because the dude talking to Aya there is none other than Kunihiko Maeda, the goofy scientist from the first game. Sure, he was basically a proxy for the Japanese audience, an excuse for the rest of the cast to explain fundamental (or, at times, hilariously inaccurate) things about New York City and America… but he was likable, too! And his presence means that, despite the title change, the game really does belong to the larger Parasite Eve world rather than simply being a game about a lady named Aya Brea.

On the other hand, there’s this: 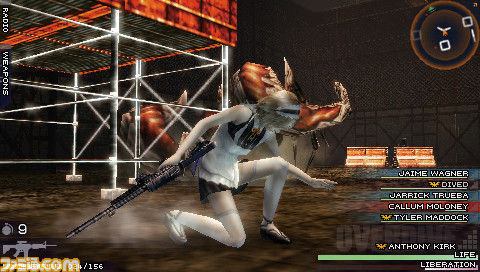 Two of the big things Square Enix is touting with The 3rd Birthday is the fact that (1) Aya has access to lots of costumes and (2) her health status is reflected in the state of her clothing. When she takes damage, her clothes shred. Her body is fine! It’s just her clothes that fall apart.

This may not be as bad as something like Criminal Girls or Disgaea 4 (wherein you spank female characters to punish them and make them obedient), but it’s a symptom of the same general malaise — the one that has transformed a significant percentage of the anime market into cookie-cutter pap about half-dressed, big-eyed, underaged girls in vaguely (and often not-so-vaguely) fetishistic situations. Namely, the fact that the Japanese market for nerd pastimes is shrinking, and publishers are growing increasingly desperate to keep the audience’s attention. The one remaining reliable market segment seems to be a small but distressingly visible slice that eagerly buys up pandering or borderline-obscene content. Make no mistake, this is hardly indicative of the tastes and interests of Japan gamers at large… but this particular audience does represent what may be the closest thing to a guaranteed sale over there these days, so publishers seem to be increasingly willing to suck up their dignity and cater to them.

I’m disappointed to see that Square Enix has given in to this particular rend, and that Aya is their sacrificial lamb, so to speak. I suppose it does make a sort of sense, since she’s always been the company’s “sexy” character, which is to say she wore a somewhat slinky formal gown for an hour of the first game and appeared in an obligatory PG-rated shower scene in the second (spending the remainder of both adventures in a practical jeans-and-leather-jacket ensemble), but it’s a shame that the series’ long-awaited return has to be marred by this sort of nonsense. I rather doubt that having Aya in a sexy maid costume which can be ripped to revealing tatters by enemy attacks will in any way improve my game experience, let alone convince any skeptics I know that gaming is a healthy, mature medium that is as friendly to adults and women as it is to adolescent boys.

What makes it especially galling is the fact that one of Aya’s most publicized costumes is that of Lightning Farron from Final Fantasy XIII — no real surprise given the involvement of key FFXIII staff like Tetsuya Nomura and Yoshinori Kitase — yet this flies in the face of the fact that Lightning is one of the few times Square has truly gotten a female character right. Sure, Lightning began as an admitted female stand-in for Cloud Strife, a way to let legions of Final Fantasy VII fanboys explore their attraction to Cloud without being forced to confront uncomfortable questions about their sexuality, but she transcended her obvious inspiration to become a great character in her own right. She’s definitely an atypical Final Fantasy lady, as her story doesn’t revolve around a man and she never mopes about oh poor me what do I do. She’s motivated by a threat to her family; she comes from an experienced background, yet still manages to grow as a character over the course of the story; and while she begins the game with a pretty rotten temper, it actually seems perfectly justified given that she’s really just pissed off about what happened to her sister. Say what you will about FFXIII, but Lightning was a well-written character who avoided all the meek clichés so common to females in Japanese media. She didn’t stand around with her lower lip trembling as she clasped her hands to her bosom, but neither was she just a one-note violent maniac. Her outfit wasn’t even particularly sexy or revealing! Honestly, of all the games I’ve played over the past few years, the only female character who’s impressed me more than Lightning has been Commander Yukiko Shepard.

So yes, it rankles me that this creative team is allowing their designated peek-a-boo sex kitten to dress up as an effigy of their one bit of evidence that they actually can write respectable female characters. I’m still looking forward to The 3rd Birthday, because everything else about the game seems great so far. But every time Famitsu shows off Aya’s latest piece of fetish gear, I can feel my fingernails digging into the palm of my hand in irritation.

25 thoughts on “Maeda of Dishonor”