I did something shocking last weekend: I played a video game for my own enjoyment. Not a big deal, you say? But see, that’s something I haven’t done all year. It was the first time in 2010 I had taken an entire day away from working, from hovering over my chronically ill fiancée, from worrying about 1UP projects, from plugging away at GameSpite Quarterly, to ditch everyone and everything and spending a few hours absorbed in pure escapism for my own benefit. I don’t think I realized how much I needed the escape until I actually took it, but yeah. It probably added years to my life.

I actually had a tough time deciding what to play, because I knew I could probably only invest ten hours or so and didn’t want yet another addition for my growing pile of perpetually unfinished shame. So I went with something I knew I could complete and that I’d enjoy: Mega Man Legends.

Toward the end, I suddenly realized this might be one of my all-time favorite games ever. I’ve certainly played it to completion more than any other PlayStation game, and more than any other Mega Man game besides 2 and 3; I’d guess this was probably my seventh trip through the adventure, which doesn’t even include all my false replay starts over the years. The whys and wherefores of my affection for the game deserves a full essay (which, I’m sorry to say, you’ll have to suffer through in GameSpite Quarterly 8), but toward the end of the quest I stumbled across a situation that neatly summed up what makes Legends such a great game. 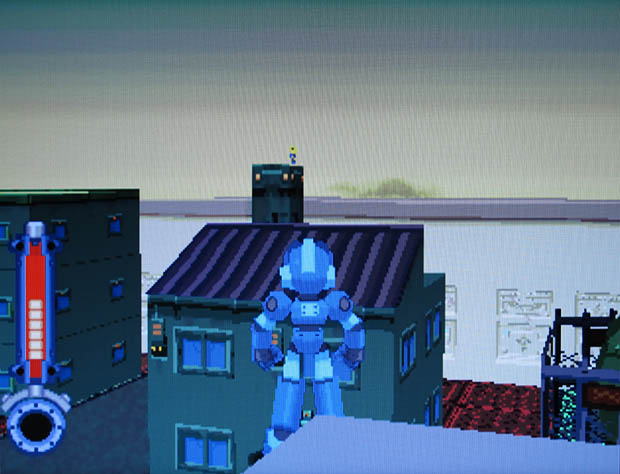 A Servbot on the roof.

There he is against the twilit sky, spotting for the Bonnes in the eerily deserted Old Town portion of Kattelox Island. This happens in the final hour or two of the game, and it’s easily missed. In fact, I had never noticed them before this playthrough, and this time it was only by complete accident. I just happened to exit the Main Gate dungeon to trigger the battle with Tron Bonne’s ultimate war machine, Theodore Bruno, and randomly looked around the city from atop the warehouse where the fight begins. Much to my surprise, I noticed a tiny Servbot across the street. Panning around, I quickly spotted another, and another.

All told, there are three of the little guys keeping watch around the city. I assume they show up once you open the Main Gate. They’re easily missed, since you would never notice them from the ground due to their size, the game’s resolution, and the limitations of the camera interface. Also, the Old Town area isn’t easily navigated by rooftop, so there’s no real point in climbing the houses, meaning you wouldn’t likely see them that way, either. But the game’s creators put them up there anyway as a subtle little hint that you’re getting close to the final showdown with the Bonnes (who are presumed dead at that point in the story). 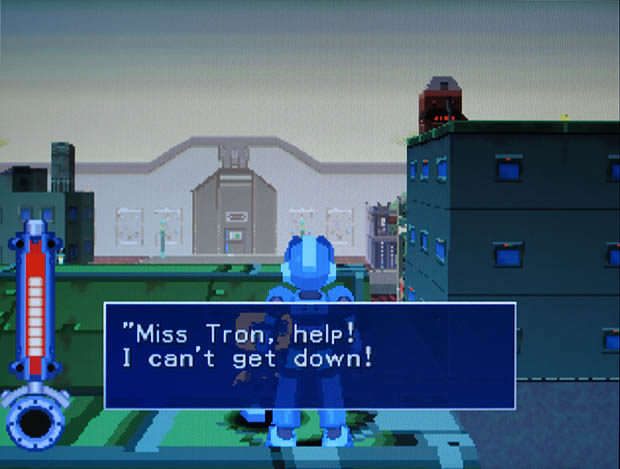 Even better, each of them has something to say if you take the time to talk to them. Incidentally, you can’t just hop over the fence from the warehouse where I spotted them — there’s an annoying invisible barrier that forces you to go back underground. (Even Legends isn’t without its lazy design flaws.) But if you retrace your footsteps underground and find a way up to talk to them, they’ll give you subtle hints about where you should be heading next. Or, in the case of this guy, just act helpless and hapless. They are Servbots, after all.

They say God is in the details, although I suppose that’s debatable depending on your perspective on theism. But good is in the details, too. Despite its clunky controls and the really childish narrative of the game’s first few hours (it does get better), Legends holds up precisely because of the detail the developers lavished on it. After all this time, it still stands as an example of how to make a really satisfying adventure: the setting is compact, yet open. The island is freely explorable, but it’s more structured than a sandbox game. The contained environment and relatively small size of the world allowed Capcom to update the setting repeatedly throughout the quest; there’s a finite number of NPCs who constantly have something new to say, and odd little details show up where you might miss them. Like these Servbots, here.

This is something that was lost with Mega Man Legends 2 amidst the game’s aspirations of scale and global drama. I suppose it’s probably too much to hope that Legends 3 will recapture it, huh? Really, it’s kind of a lost art altogether these days, as Japanese developers tend to create smaller worlds with restrictive interfaces while western designers give you vast, empty worlds to explore and no real reason to dwell. Honestly, this creative philosophy wasn’t especially common when the original Legends debuted. I suppose that’s why it still holds up as a unique creation.

17 thoughts on “Another reason Mega Man Legends is really great”