We could be 4 heroes 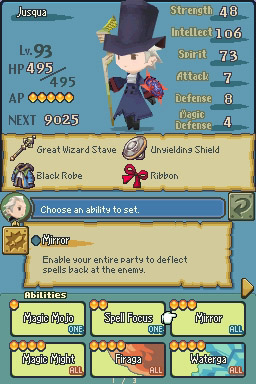 I was worried for a little while that I was going to be the only reviewer who actually enjoyed Final Fantasy: 4 Heroes of Light, but after posting the review today I happened to flip through the latest Nintendo Power and discovered that it scored high marks there, too. I figure if Casey Loe digs an RPG, I’m in pretty good company.

I guess it wouldn’t be so bad to stand up and praise a game that others dislike, though. Some titles earn their vituperation by being lousy, but sometimes they’re just a little too unconventional for most people. I’ve slagged more than my share of games that didn’t really deserve because I didn’t give them the fair chance they deserved, so I make a sincere effort not to do that anymore. It’s just a matter of being responsible, you know?

Not that I had to try hard to appreciate 4 Heroes. It clicked with me from the start. And I swear it wasn’t just because the game’s Black Mages wear top hats! I dunno, there’s something ineffable about the way the game feels that really appealed to me, and it didn’t take long for all the game’s odd little mechanics fall into place for me. Maybe you’ll hate it, I dunno. But I hope you’ll give it a shot. It’s one of the more unusual but thoughtfully designed RPGs to come along in quite a while — not as universally appealing as a Dragon Quest IX or as bold as a Mass Effect 2, but like, whatever, man. It’s good, in its weird way. The end.