The Tetris that ate Tokyo

Our TGS coverage slowed down enough for me yesterday that even juggling interviews and a fruitless trip to cover pre-launch madness at the Hamamatsu-chou Pokémon Center, I still had time to make my first visit this trip to an arcade. Nothing much there interested me, though. Or at least, not until I saw this beauty: 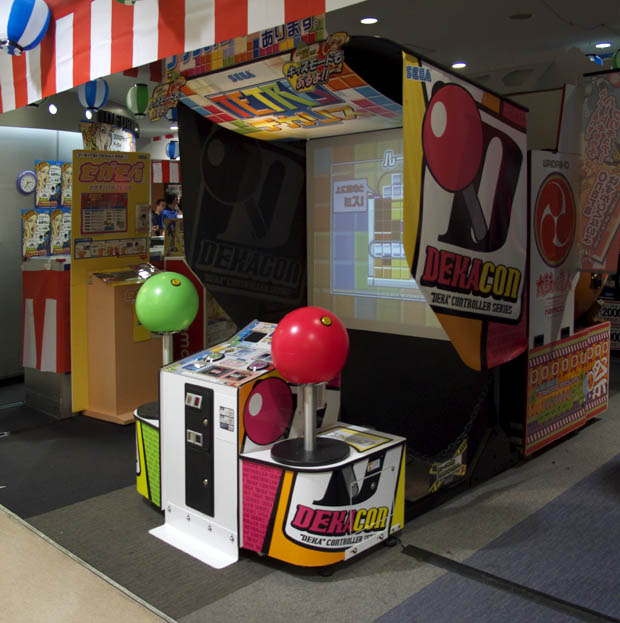 I’d seen images of Sega’s Dekacon (roughly, “huge controller”) version of Tetris, but the whole thing is even more ridiculous in real life. It’s sized so that the controller is roughly waist height on an average adult, so you control the massive stick by placing both hands on the foot-diameter knob and exerting some moderate elbow grease to move the stick enough for it to register as an action. It really changes how you play the game, because every move has to be more deliberate and takes a little longer to execute than with, say, a D-pad. Cleverly, the buttons to rotate the pieces are built onto the controller knob right about where your hands rest, so it’s actually pretty ergonomic and sensible.

Annoyingly, this thing costs ¥100 to play, and you’re given about two minutes of time (which can be extended by clearing multiple rows of blocks) at which point you’re expected to input another coin. This is where Japanese arcade games can be dangerous, because hyaku-en pieces have a very similar size, heft, and feel to American quarters… but at the current exchange rate, they’re worth nearly five times as much. I’ve been very, very conscientious this trip about not letting myself fall into the trap of pumping ¥100 piece after ¥100 piece into machines only to discover half an hour later that I’m twenty bucks poorer.

Anyway, the best thing about this version of Tetris is that if someone cuts the line and doesn’t respect the proper rules of arcade propriety, you can rip the controllers from the cabinet and beat the interloper to death.

6 thoughts on “The Tetris that ate Tokyo”