The problem with Etrian Odyssey

You know, much as I love the Etrian Odyssey games, I’m finding their tendency to bleed into real life has begun to grow somewhat alarming. Maybe it’s inevitable, given the series’ core element of physically mapping your progress on virtual graph paper, tidily integrating a real-life meta-game concept into the heart of the adventure. But I was willing to chalk up my F.O.E. encounter in Nara, Japan to coincidence. I was even willing to put aside the time I was sitting on a park bench mapping the first game’s first stratum only to look up and see a deer standing a few feet from me.

But no! Yesterday I had a real-life encounter with the dreaded Claw Shrimp. Now it’s getting serious.
I was simply out yesterday morning enjoying a walk through Golden Gate Park, heading from my apartment to an Irish bakery up in the Richmond district to the north of the park. It was a cool, overcast morning, and strolling through the pedestrian paths of the park reminded me of being up in the mountains of New Mexico on a summer morning. It was a beautiful, peaceful, pleasant experience. Especially with the distant smell of a wood fire burning somewhere. (I crossed my fingers and hoped that it was a controlled fire.) But as I turned to skirt the western edge of Stow Lake, I was suddenly confronted! 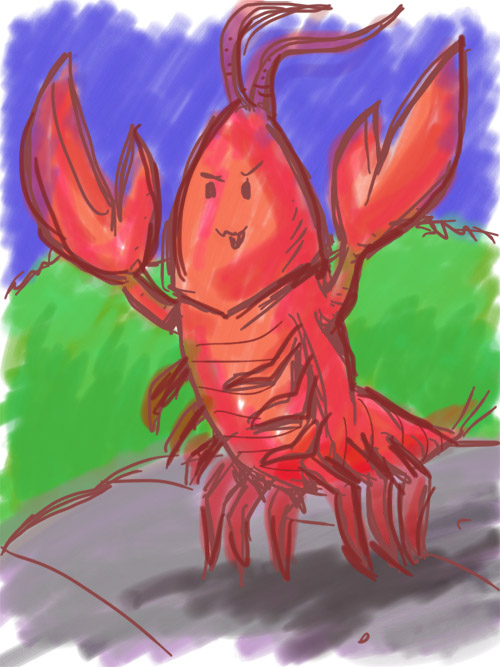 Claw Shrimp appears! Command?
It was walking along there, dead center in the middle of the pedestrian foot path, facing me directly, its upper abdomen bent upward and its claws raised high in the air as a sign of challenge.

We both stopped and faced each other for a tense moment. Neither of us dared act, knowing that whoever made the first move had to perform flawlessly lest he leave his guard down for a deadly counter. Suddenly the mountain chill in the air was less pleasant, more ominous: a funereal cold.

Then an old Chinese lady who was passing by picked up a big leaf from where it was laying on the grass, swooped in, used the leaf to grab the claw shrimp, and chucked the thing into the lake.

An anticlimax to be sure, but I can’t rest easy knowing that this dread nemesis was merely thwarted rather than defeated. It’s out there, waiting. Me? I’ll be taking the bus next time I need to cross through the park.

19 thoughts on “The problem with Etrian Odyssey”