No dragon your heels

Last week, a friend posed a difficult question to me: What exactly is it that makes Dragon Quest (and specifically DQIX) different from Final Fantasy? It kind of threw me for a loop, and I spent some time thinking about it before responding. I don’t remember my exact answer, but it was probably overthought and needlessly convoluted and generally not much help. Something about the difference between a Hollywood action “blockbuster” versus a heartfelt Pixar film. Whatever. 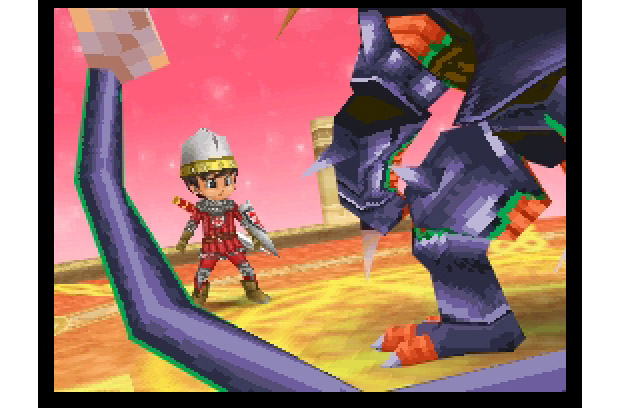 Tonight, playing back through the opening chapters of the game (yes, a third time through the game, shut up) I realized the real difference is perfectly summed up within the first two hours of DQIX. The premise of the game, as you really should know by now, is that the player controls a fallen angel — Celestrian, I mean — whose goal is to find a way back to the Heaven-esque Observatory and help reunite his/her people with the estranged Almighty. I could easily see this essential premise being translated into a Final Fantasy game (albeit with some tweaks to give the Celstrians strappy vinyl outfits and heavily teased hair, and a sci-fi facelift for the Observatory), but its presentation would be totally different.

I’m not talking about the cinematic aspect of it, which of course would be radically different in a Final Fantasy game. I’m talking about the structure of the story. In a Final Fantasy game — or, really, any RPG — the player’s basic nature would be the game’s big twist. Your hero would be an amnesiac, gifted with special powers but not quite fully empowered the way a proper Celestrian would be, and it would all be a big mystery to be revealed in a heart-stopping plot event 30 hours later. There would be much angst, maybe a tantrum or crisis of faith that would remove the hero from the party, temporarily, until the power of friendship could return his moral compass to its proper orientation.

DQIX is refreshing in its directness. It skips all of that angst and contrived mystery by kicking off the entire quest with tour through a day in the hero’s life. You see the accident that robs him of his powers and his unfortunate fall from the Observatory, and there’s no hand-wringing about it. The story picks up shortly thereafter and you simply get about the business of trying to return to the heavens, which you accomplish by doing nice things for people and generally making the world a better place. It’s earnest, and it’s pleasantly free of pretense. The story has its twists, but the straightforward presentation of the tale gives real purpose to the hero’s actions — a reason to do good deeds — and makes the ultimate resolution to the story (which involves the hero’s nature) much more potent.

39 thoughts on “No dragon your heels”