Jess recently bugged me to write more music reviews, like I used to do, uh, a bazillion years ago or so. This makes him one of several people who had posed a similar demand of late. But he made it easy on me by requesting a very specific write-up: Drama by Yes. So here you go, Jess. This one’s for you. Now gimme a dollar. 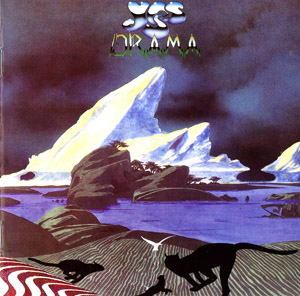 Drama might just be the most under-appreciated record Yes ever recorded. You can blame the circumstances surrounding its birth for much of that disdain: It’s the single Yes album to completely lack any input whatsoever from the series’ iconic, lilting, man-faerie of a vocalist, Jon Anderson. After the absolute mess of a record that was 1978’s Tormato, Anderson wisely bailed from the band to work on solo projects and a string of poppy, electronic works with Vangelis, of all people. This was a wise decision, because it resulted in “The Friends of Mr. Cairo,” which is great.

But it kind of left his band in the muck; after more than a decade with a rock-steady front man who helped keep an even keel and a consistent sound through no end of lineup changes, the band was suddenly headless. To make things even worse, keyboard god Rick Wakeman chose that same juncture to leave the band (again) and wander off to make New Agey concept albums about King Arthur. And worst of all, the band couldn’t have chosen two more unlikely replacements for Anderson and Wakeman than Trevor Horn and Geoff Downes. They were The Buggles. They were known for short, sparse, post-punk tunes like “Video Killed the Radio Star,” the diametric opposite of everything Yes stood for.

And yet, somehow, Horn and Downes helped put together an incredibly strong and decidedly Yes-like work in Drama. Their catchy pop sensibilities mitigated the indulgences of guitarist Steve Howe and bassist Chris Squire, and the two very different schools of composition met smartly in the middle. Drama featured the long-form composition and instrumental virtuosity fans demanded, but with a cleaner, more powerful sound than ever before. The opening track, “Machine Messiah,” embodies the spirit of the entire album: It begins by fading up into a stomping heavy metal wall of guitar riffs, which iterate a few times through before giving way to a light-hearted acoustic passage, accompanied by Horn doing his best Anderson-esque castrato. Over the track’s ten-minute running time, it alternates between these two extremes, sometimes aggressive, sometimes uplifting, constantly changing tempos and keys and sound without ever feeling disjointed.

“Machine Messiah” is then followed by “White Car,” an odd 81-second track that sounds for all the world like it’s going to be an epic, orchestrated, 15-minute masterpiece along the lines of 1977’s “Awaken,” only to end abruptly (yet gently!) after the first verse. The two tracks are quite a contrast, but they share one quality in common: Neither is quite what it initially seems to be. Yet both sound, unabashedly, like Yes.

The album’s best-known tracks are the pair of six-minute rockers that end each side of the record: “Does It Really Happen” and “Tempus Fugit.” These tunes are the album’s centerpieces for a few reasons. They feature a heavy emphasis on the rhythm line laid down by Squire’s floor-shaking bass; they both have similar straightforward tempos complemented by dense instrumentation; and they both serve as accessible anchors to cleanse the palate after the topsy-turvy compositions of Drama‘s other four tracks. They also unknowingly predict the band’s sweeping New Wave-inspired reinvention that would come three years later in 90125… yet unlike the sound that Trevor Rabin would bring, they feel like natural evolutions of the band’s legacy as well.

Of course, all of these things — most of all the absence of Anderson — have led many Yes fans to dismiss Drama as an ill-considered cash-in on the band’s name. But that’s giving short shrift to six excellent and varied songs, not to mention one of the most cohesive and structured records the band ever assembled. For whatever reason (like the Anderson fan blowback), this incarnation of the band only lasted for a single album and the subsequent tour, and Yes has never officially released any live recordings of Horn’s take on Anderson’s oeuvre — a pity, because the thick, powerful audio of the album suggests that this might well have been the single most impressive-sounding live incarnation of the band. I mean, heck, this may be the single album where drummer Alan White actually seems to belong. Usually his direct style seems at odds with Howe’s virtuosic guitars, but the bright compositions and tidy mastering and engineering present in Drama — an artifact of that fleeting time in music history where analog technology was at its pinnacle and digital recording was still a slightly distant dream — help unify their work, with Squire’s amazing bass providing the glue and Downes seemingly content to use his keyboards largely for texture.

It’s a great album: Accessible but not overtly radio-friendly. Too bad most of the band’s fans seem to hate the thing. But hell, I’ll be the first to admit that Yes fans are mostly a bunch of stuck-up prigs with questionable taste in music.

20 thoughts on “By request: Drama”