It being July 4 today, and that being Independence Day, I thought I would look back into the nation’s history to explore an old TI-99/4A favorite: Chisholm Trail. I remember playing it and enjoying it back in elementary school, though perhaps not as much as Parsec. In truth, I played and liked it nowhere near as much as Parsec; when I sat down to research the game I discovered I had a wildly incorrect image of it in my head. I was actually thinking of Tombstone City, a two-player cowboy shootout duel. Chisholm Trail, on the other hand, is a deeply bizarre shooter which casts players as a head of cattle — literally, you play as a cow head — cruising around a battlefield firing bullets at abstract-looking enemies.

Looking at videos of the game in action, though, I do remember Chisholm Trail. Mainly I remember being deeply confused by it. I never really understood the point, or why I was a bullet-slinging cow head, or what the weird enemies I was fighting were. A little research online failed to reveal the truth behind any of these mysteries to me. I was on the verge of surrender when I stumbled across the box art, which weirdly enough offered the only concrete explanation of the game I’ve ever seen: 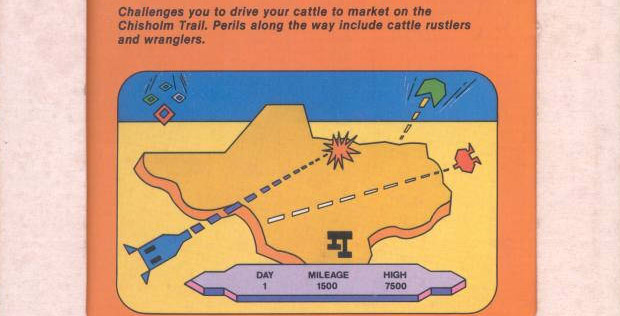 I’m not sure I understand how driving cattle along the Chisholm Trail translates into an abstract, non-linear maze shooter. But at least the whole cow skull thing makes a little sense now. Another mystery of my childhood has been solved… even if I didn’t actually remember the mystery in question until about an hour ago.