Frank Cifaldi dug up the most amazing thing today: Photos of Toru Iwatani’s Pac-Man concept sketches, including map and monster pattern layouts (above) and pixel designs for the little yellow guy himself. I’ve spent most of the day boggling at the fact that this article went practically unnoticed by most people; I guess it didn’t have enough booth babes and 3DS tethergirls? So it goes, I suppose. 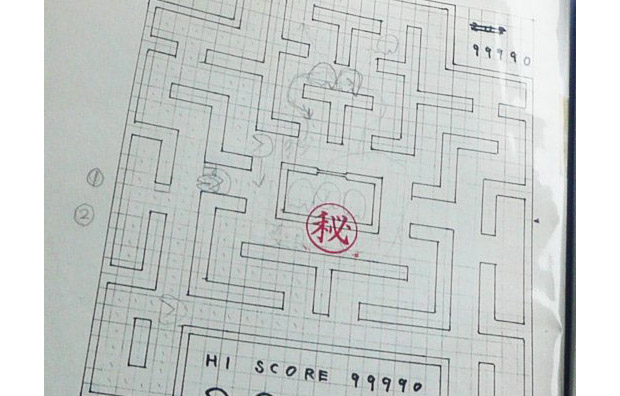 This is the most fascinating videogame thing I’ve seen since… hmm, I guess since that Iwata Asks where Shigeru Miyamoto showed off similar graph paper sketches of the original Legend of Zelda. This is literally a medium’s blueprints, a look at the construction of one of gaming’s most important and iconic creations. It’s especially fascinating in a case like this — Pac-Man is such an incredibly simple game, so all the conceptual changes it underwent are an insightful look into how the process of game design got its start. The early maze layout above is interesting for the way it artfully integrates the score display into the play area… but at the same time, the maze itself looks kind of painful to play. The little boxed in areas on either side are especially terrible, seemingly existing for the sole purpose of killing players. No thanks, Mr. Puck-Man, sir.

You have to wonder how many iterations the game’s layouts underwent through the months before its final build. There were tons of Pac-Man inspired maze games back in the early ’80s, and none that I’ve ever played were half as enjoyable as the real thing. One kind of assumes Iwatani and his associates burned through stacks of graphic paper, working and reworking the maze layouts until they were perfect.

Are most people just not interested in this? I wonder. Maybe it’s because I’m all old and stuff. Seeing the prototype outlines for a game that was such a cultural force when I was a very impressionable young man is like seeing the raw clay of my childhood. It’s kind of amazing! I would kill to dig through those reams of graph paper.

Yes, kill. I told you the violence of modern videogames is a bad thing, but did you listen?