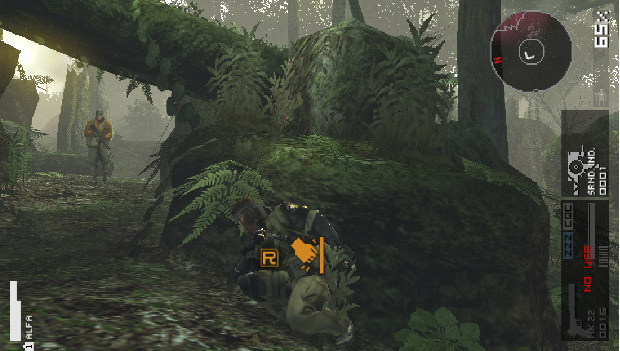 Well look at what we have here: A review of Peace Walker. And a favorable one, too! Provided you’re not spoiling for a fight to defend the honor of a videogame from some mean ol’ reviewer who obviously hates Metal Gear, what you’ll take away from the review is:

I still have a lot of Peace Walker left to play, truth be told. The story mode is probably a good 15 hours of play time, and if you’re like me and tackle all the side missions as they become available and focus on recruitment for your base, that’ll pretty much double the time to reach the ending. All of that and I’ve still only seen maybe… a third of the total game, probably? Granted, everything left to be done is extra, post-game content, but it’s all really fun and I’m looking forward to it. Just as soon as I’ve reviewed Dragon Quest IX….

What I find most striking about Peace Walker, though, is that Kojima Productions has largely revitalized the series by taking what could be argued as a massive step backward. Metal Gear Solid was an amazing game in 1998, largely because of how it seamlessly married interactivity to narrative. It was a game that felt like a dynamic movie in a way that no one else had ever achieved at the time, despite the existence throughout the ’90s of an entire sub-industry dedicated to accomplishing precisely that. Here in 2010, Peace Walker achieves greatness by distancing itself from its narrative, breaking the entire story into small chunks, dividing the game into discrete, self-contained missions, and basically emphasizing its intrinsic game-ness in every way.

It’s a weird sort of evolution for the series to take, although this certainly isn’t the first time Metal Gear has gone in this direction. Still, Peace Walker’s design and structure are significant, because it’s a game that has been treated, for all intents and purposes, as the next chapter of the franchise. It’s entirely possible that Peace Walker’s bite-sized design is simply a trend-jumping act of desperation to keep the series relevant in an increasingly unfriendly Japanese market, but I wonder if that’s really the case. More likely, I think we’re seeing an increasing amount of polarization in game design, with developers feeling pressure to make a choice between all-encompassing cinematic immersion or smaller, more manageable formats. Metal Gear helped pave the way toward the former, but the cost of entry to creating that sort of experience is growing steeper by the year. So, now Kojima and crew are exploring the latter.

Who knows; maybe Peace Walker is just a crazy, random abberation. Or maybe it represents the bigger picture, but only on the Japanese side of things. But I would be perfectly OK with it being part of an industry-wide trend toward developing games that focus less on being a Grand Blockbuster Experience and more on giving players lots of interesting things to do without trying to pretend that you’re doing anything more than playing a videogame.

This medium needs to take a little more pride in what makes it unique, and Peace Walker is the first time a major production helmed by Hideo Kojima — the poster child for gaming’s Hollywood aspirations — has taken an active step away from filmic narrative and immersion in favor of good old-fashioned playability. Nothing would make me happier than to see this sort of thing catch on and for games to get back to being games. Who cares if videogames are Art? As long as they’re videogames, they’re a form of entertainment wholly separate from any other. So here’s to Peace Walker and its bold act of self-acceptance.