Welp, I’ve been dreading this one for a while now, but I feel kind of obligated since Chris Kohler was kind (?) enough to donate the subject to the cause. And Cat started some hardcore diet of sadness and deprivation today, so it seemed as good a time for me to suffer as any. Love and solidarity through shared palate punishment, and all that. And thus I bring you: Kit-Kat Densetsu Banana Bar Edition. 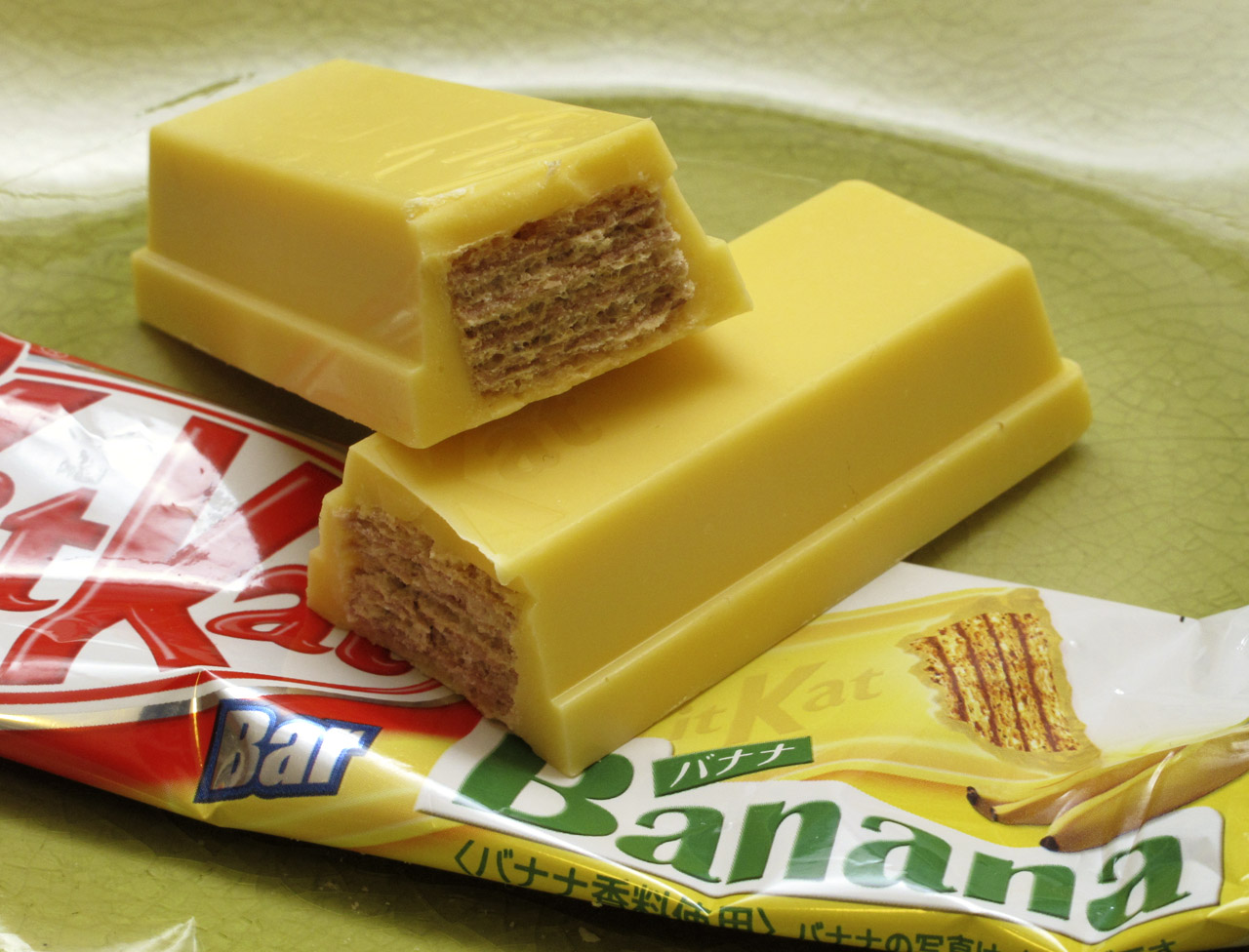 The notion of a Kit-Kat Banana Bar makes my stomach flip-flop a bit for not one but two, two, two exciting reasons!

First: it’s a Kit-Kat bar, not the usual mini-Kats I’ve been writing about, which means that it’s basically a single Kit-Kat stick xeroxed to brobdingnagian size, with all its component bits basically maintaining the same ratios and proportions as its smaller counterpart. Look at the thickness of that, uh, chocolate? If you can really call a waxy, yellow, banana-flavored substance “chocolate.” (Legally, I don’t think you’re allowed.) The scaled-up size means that if there’s a part of the bar I don’t like, it’s not a delicate hint like on a normal Kit-Kat. No, it’ll be a monstrous, never-ending beating of my taste buds.

Secondly: banana. I like bananas as much as the next dude, provided the next dude isn’t a monkey, but banana candy does not have a good track record in the history of our humble species. Banana-flavored sweets tend to be cloyingly perfumed and generally just too danged strong, savagely inflicting a chemical fruit taste upon your gentle taste buds without even offering a decent amount of potassium to justify the assault.

Needless to say, I approached this venture with some trepidation.

Funnily enough, though, that terror wasn’t fully justified. I can’t say I’ll be going out any time soon to stock up on Banana Kit-Kat bars, but at the same time I don’t feel a need to scald my tongue until it forgets the heart-rending sensation of what it’s like to taste, either. I have had considerably worse in the course of this endeavor, that’s for sure.

This bar has two redeeming traits. First, while the yellow “chocolate” is very definitely banana-flavored, it’s not stridently so. Uh, assuming flavor could be said to be strident. It’s nowhere near as delicious, rounded, or mellow as a real banana, but so far as grotesque polychemical mockeries of fruit go, it’s pretty alright. And secondly, the makers of this particular confection had the good grace not to make the wafer-and-creme filling part taste like banana, too. The actual flavor of it was sort of lost amidst the banana-ness of the coating, but at least it wasn’t suffused with perfumed faux-fruit essence. The straightforward neutrality of the wafer is a sort of… of… flavor oasis for your tongue. The eye of the fake-banana storm. A seventh-inning stretch for your tongue amidst an imaginary plantain home run rally.

I guess what I’m saying is that the Kit-Kat Banana Bar is surprisingly inoffensive — maybe well-balanced, even. So I guess we can take Japan off the trade embargo list again. You guys got lucky this time.