You are not allowed to call it DraQue

You may have heard that Dragon Quest IX is launching in the U.S. July 11. I have already put in an order for two copies; one for myself, and one for the fiancée as a sort of last resort to get her interested in RPGs. She’s been on a gaming kick lately, but keeps reaching a point at which she’s frustrated by her inability to advance past the sticking points in whatever she tries. DQIX is highly approachable, and the coop means I can actually join in her game and help when she gets stuck, so I’m hoping this does the trick. Of course, there’s the not-insignificant issue that she doesn’t like games that involve a lot of reading and menus, preferring instead to shoot at things and blow them up, but if anything can break the mold it’ll be DQIX. And if not… well, keep your eyes on the Trading Time thread on the forums, I guess. 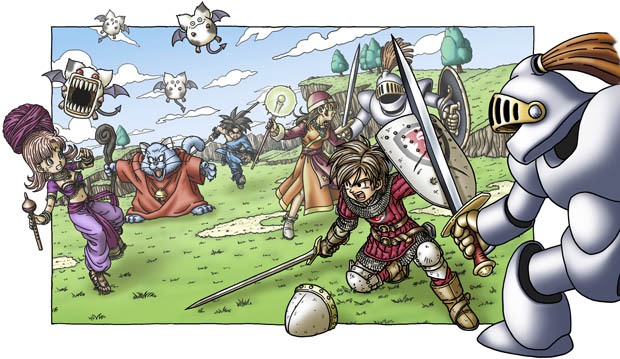 I have another preview of the game up at 1UP. It’s, like, my third. And that’s not including all the podcast talk and blog posts I’ve penned about the game. What can I say, I like it.

More importantly, I think it’s a very forward-thinking game despite the reputation for stagnation Dragon Quest commands among the American gaming public. Yes, it’s running on 1995’s technology, and it’s a turn-based RPG, and yadda yadda blah. But its social components are extremely innovative, butting a classic RPG up against the realm of MMOs, and that’s far more important than its polygon count. Videogames have reached a point where technology is more or less moot; only large studios with millions to spend can make games that truly push the boundaries of visual design, and the need to make a return on that investment brings with it a certain creativity-stifling caution. Not that pretty games are inherently boring. That would be a ridiculous claim! But the need for market performance often suffocates invention.

The future of games is pretty clearly in socialization. Nintendo’s turned Wii into a stunning success, and why? Because its design emphasizes socialization rather than sitting alone, hunched over a controller. Facebook games are huge (or were right up until Facebook turned stupid a few weeks ago), and Mafia talk has taken hold of Talking Time like a particularly annoying kudzu. Why? Because these games are about sharing, networking, communicating. How we play games has grown to define the medium, not how pretty the games we play are. Dragon Quest IX changes the way one of the medium’s oldest genres — the turn-based RPG — is played. That’s a damn revolution, right there. And the fact that it’s built on the series’ basics, its lovable enemies and distinctive skills and emphasis on small, self-contained vignettes about the lives of everyday people, just means that all those social elements are bringing people together to enjoy something genuinely worthwhile.

So anyway, I hope to see you and your copy of DQIX this year at PAX. I would like to siphon off all your awesomest treasure maps, please.

24 thoughts on “You are not allowed to call it DraQue”