Hey, I think I am finally getting the hang of this finger painting thing. The quality of my work is almost as mediocre as it is with more traditional media now, rather than simply being downright awful. The iPad still has some weird quirks, though, like the way it auto-corrects “simply” to be “simony.” If my blog posts randomly slip into Catholic dogma, I swear it’s not my fault. 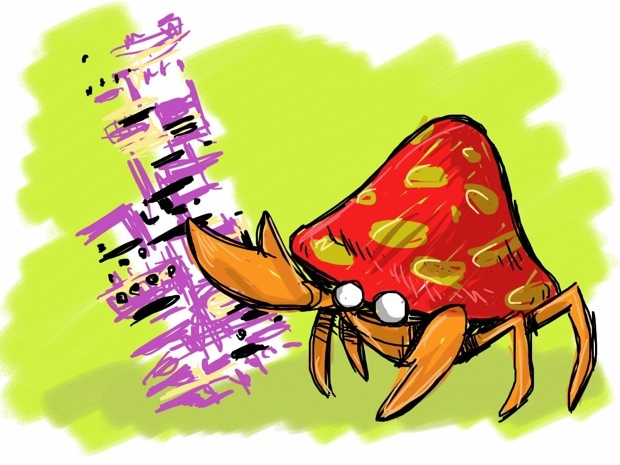 And this will be the last Pokémon doodle, swear on my pen-pal’s pancakes. I’ve just taken an interest to the franchise lately, and not even particularly because of the games themselves. Sure, HeartGold is well-made and scratches a certain compulsive itch, but it really isn’t incredibly different from the last who-knows-how-many iterations of the series, and I don’t expect the upcoming Black & White generation will change much, either. Game Freak sort of painted itself into a corner by including the entirety of the first-generation world and bestiary in Gold & Silver, because now incorporating all brazillion* existing critters into each new chapter along with all their extant moves in addition to a bunch of newcomers is simply expected of them. I suspect the next gen derives its titles from the fact that the sheer weight of each game’s content will cause them to collapse into a black hole or a white dwarf, destroying the very fabric of the universe’s free time in a tragedy of cosmic proportions.

No, what I find truly interesting about Pokémon is the culture surrounding it. I spend more time reading forum threads about the games than I do actually playing them, because they’ve developed an amazing fan culture.

Back when I was in college, lo those many millions of years ago, I was wandering with a friend through the aisles of Toys R Us, mainly because there wasn’t much else for a tea-totaling, non-football-loving person to do in a small West Texas city on a weekend. Eventually I stumbled upon a sad little corner of G.I. Joe figures, all ignored and dilapidated in their horrible neon packages and bizarre Street Fighter/Jurassic Park tie-in sub-lines. Across the aisle was a vast number of Power Ranger toys, flooding the shelves and clearly selling at a much faster clip than the Joe toys based on the relative levels of dust on each. It was a moment of revelation for me as I realized the stuff I grew up knowing and liking was completely irrelevant to an entire generation of kids. To them, all the toy tie-in cartoons I watched after school were about as interesting as Howdy-Doody or Soupy Sales had been to me.

Fortunately I had enough of a sense of perspective back then not to feel old about all of this. I mean, I was still in college. Rather, my curiosity was piqued. Eventually, I reasoned, the kids who grew up watching Power Rangers and such would be adults, and they’d look back on the media of their childhood with the same fondness as I regarded the Joe comics I’d read as a kid. But Power Rangers seemed so asinine relative to the better days of Larry Hama (who, P.S., is awesome); would the next generation of humans really have nostalgic fondness for this stuff?

In Pokémon, I have my answer. Of course childhood nostalgia is a powerful force for our self-absorbed society; I was simply looking to the wrong catalyst. I don’t doubt there are kids who pine for Power Rangers, but I suspect they’re seen by their peers the same way people my age regard guys who swear Thun-Darr the Barbarian was a work of sublime genius. No, the true motive force for nostalgia for the fledgeling nerd-adults currently finishing college or muddling away at their first jobs is Pokémon. Which, I have to say, gives me a little more faith in you guys.

HeartGold and SoulSilver seem to have kindled that spark of nostalgia among people who counted the original Game Boy versions among their first videogame experiences, and understandably so. Pokémon as a game — disregarding all the ancillary material, none of which seems particularly worthwhile — was a dense creation, a tiny Game Boy cartridge crammed to bursting with creatures and content. And there was a fascinating streak of darkness about it all, like the creature Parasect, which looks like a hermit crab but actually is a zombie insect being controlled by the shell-like mushroom on its back. Grim!

Pokémon was crammed so full of content, in fact, that it was incredibly glitchy, resulting in hidden treasures like Mewtwo and terrible mistakes like MISSINGNO. That unique combination of refined gameplay, rich in-game lore, and a profusion of glitches that toed the line between deliberate secret and borderline disaster was a fertile playground for young imaginations.

Of course, I missed out on all of that at the time. So it’s been fascinating to read forum threads in which I see other people’s shared childhood experiences refracted through the lens of adulthood — a small window into what life might have been like if I’d shown up a decade later than I did. And, also, a lucid insight into what has ultimately proven to be a pretty fascinating videogame creation, despite my first impressions.

* A brazillion is a complex number. It is the numeral one followed by a number of zeroes identical to the current population of Brazil.