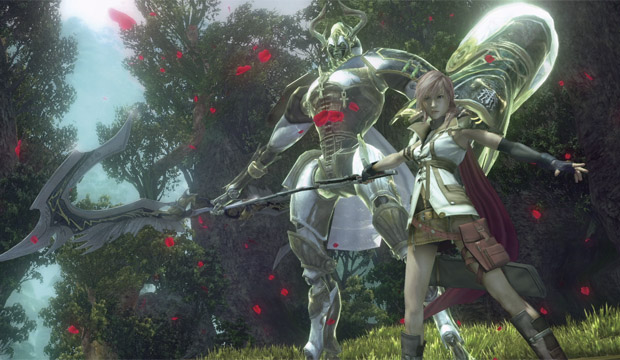 The Internet has loudly expressed its heartache over the fact that Final Fantasy XIII is an incredibly linear game… even though this is only really true for its first half. My clear time for the game was about 52 hours; at somewhere around the 20- or 25-hour mark, I hit the part where the whole thing opens up considerably. From that point, you travel through a number of much larger environments, which include a vast savannah where the main open-ended content is set (reminiscent in many, many ways of Final Fantasy XII) as well as the final “dungeon,” which is one of the most intricate settings ever featured in a Final Fantasy game — it’s eclipsed by the extensive series of underground caves spanning the breadth of Ivalice in FFXII, sure, but it’s easily on par with any other series dungeon you care to name. In between these two areas, you travel through locales that remind me for all the world of something from Half-Life 2 — packed with setpieces, fairly linear, but offering multiple routes to each objective, and dotted with NPCs who add a splash of life and scale to the world. The second half of the game is also where the Crystarium skill-building system opens up, and with it comes the availability of better items and cash for weapon- and accessory-crafting, so you’re fully allowed to build your characters to your own specs. In other words, FFXIII eventually becomes almost exactly what people generally expect from a Final Fantasy game.

Given the completely unsurprising nerd-rage over how that opening half plays out, I have to wonder why the developers were so slow to unlock the “real” game. I’m pretty sure the answer comes down to sales pressure and the need to appeal to a huge range of players.

Look at your average action game, your Resident Evil or God of War or Halo. Games like these offer a single-player experience that runs about 8-15 hours. Even an outlier like Assassin’s Creed II can be played to near-100% completion in 25 hours. The FFXIII team has stated they were “inspired” by games like Modern Warfare 2, which most people have taken to be some ridiculous hallucination on the creative staff’s about how they think FFXIII plays like some delusional outsider’s vision of a first-person shooter. What they really mean is that FFXIII opens with a 20-hour guided experience, mingling narrative and action in equal parts, with no room for straying, and thus no possibility that players will wander off-track and become lost, thereby killing the game’s forward momentum. Pretty much like Half-Life 2! Or Modern Warfare! Or about any modern action game you care to name.

Surely it’s no coincidence that the introductory portion of the game lasts for almost exactly as long as the single-player mode of a fairly substantial action title. The first half of FFXIII actually offers a fairly complete narrative arc in its own right, to be honest, and I’m fairly certain this is by design. The party members are thrust together, go their own separate ways, and are inexorably drawn together again. Once they join up again, the “real” game begins in that you start to figure out the main story, explore more open level designs, are forced to devise your own party and Paradigm formations, and experience your first truly challenging boss encounter.

I suspect this was intended as the dividing line between “dedicated” and “casual” players: Those who just want to take a cursory tour of a big-name game will see a lot of great graphics, get a taste of combat, and see all the heroes team up in one big happy party before shelving it. The “tourist” sections net a body as much play time from FFXIII as they’d see in any other action game, so they can put the disc back on their shelves, content in having seen the shiniest, fluffiest gaming experience $60 can buy. They get to see much of the characters’ tales, take a good look at the nuances of the game mechanics, see everyone come together, and can tune out before they have to deal with the larger plot. Those who actually get into the game, on the other hand, can stick around to finally enjoy making full use of all the interesting game systems that until that point have mostly been broadly hinted at.

I am not defending this element of the game, or this particular design philosophy in general for that matter, because — as an RPG fan — I would prefer not to have my hand held for 20 hours. The prospect of replaying FFXIII doesn’t really appeal to me too terribly much, because in my ideal world the more open, player-driven portions would appear about 15 hours sooner. I do, however, accept this approach to design as an inescapable reality of modern games. Look at Assassin’s Creed II, ostensibly the poster child for freedom in modern games; in reality, it slowly doles out skills and options throughout the entire course of the game. It’s not until the final chapter that you’re finally given free rein to play as you truly like, anywhere you want.

As frustrating as this market-conscious approach to game design is to me as a player, I can only imagine how frustrating it must be to the developers. Some of these guys have been in the business of making games for 20 years, and surely they’re eager to build on their prior experience… only to be told by someone in a suit that, no, you really ought to tone it down, because you can’t assume the player is interested or intelligent enough to appreciate the complexity of the systems you’re offering. If anything, I’m grateful that some “blockbuster” games are occasionally allowed to become more intricate in their back halves, because that isn’t always the case. (The aforementioned ACII ceases to even resemble a challenge after about 10 hours, and the final portions of the game are hilariously easy.) Wading through FFXIII’s final dungeon, battling mobs that were far deadlier than the final boss gauntlet, I couldn’t help but think how daunting some of those battles and the required strategies for surviving them must be for people who aren’t really familiar with the RPG genre… but then I realized it probably doesn’t matter, because they probably lost interest around the time they hit the savannah I mentioned earlier.

I’m certainly not being critical of people who don’t find interest in the deeper mechanics that FFXIII lays bare in its late hours. Different strokes and all that; RPGs aren’t for everyone. Unfortunately, FFXIII is victim of the fact that it’s an RPG that does have to be for everyone — and in three different international regions, at that. While many fans are lamenting the things it sacrifices in the process, having finished the game I’m more inclined to marvel at the things it managed to retain. The fact of the matter is that for every single forum post I’ve read in which someone expresses their fury over FFXIII’s linearity, I see another post in which someone says, “Huh, suddenly I’m interested in this game.” And given the fact that people on the Internet are a lot more likely to vocalize anger than satisfaction, it’s not unreasonable to assume that the silent majority will find the game’s structure to be a boon. So who’s to say which perspective is wrong?

In the end, all of this simply reinforces my relief at the existence of portable games, where small development budgets offer creators the freedom to drill down and really cater to niche audiences. Yeah, that’s right. The Nintendo DS is the last haven of the hardcore gamer. And don’t you forget it.