Stop Dragon my heart around 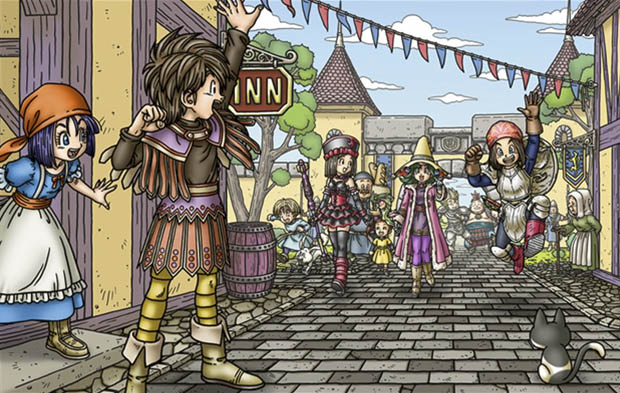 I could use a break from all my writing about/talking about/playing of Final Fantasy XIII, and Nintendo’s little event yesterday has offered the perfect excuse — and I don’t even have to leave the comfortable confines of the role-playing genre. Happily, though not at all surprisingly, Nintendo has announced it will be publishing Dragon Quest IX in the U.S. sometime this summer. I doubt we’ll see much more about their plans surrounding the game until E3, but it’s still great news nevertheless. Based wholly on its Japanese sales, DQIX may in fact be the single best-selling third-party DS title to date. I think it’s at, what, 4.1 million, now? 4.2? You can understand Nintendo’s eagerness to duplicate that success worldwide. I’m not sure if you’re aware of this, but selling several million copies of a game is a very profitable business to partake in. And Nintendo alone seems to possess the secret alchemic formula for convincing middle America that it really needs to buy these esoteric little Japanese games the company keeps peddling. If anything could ever possibly transform Dragon Quest into a hit outside Japan, it is Nintendo.

Even though Nintendo didn’t have any official announcements regarding the game, I poked around for more information on a more casual basis. Unsurprisingly, no one was saying too much, though I did manage to sort out the fact that Square Enix will be handling localization; Nintendo’s mainly on board for publishing and marketing. Though it does sound like Nintendo has been providing feedback into some of how the localization will be adapted — not the text part of the localization, but rather the social mechanics of the game.

That’s a very important consideration. Essential, in fact. The single most fascinating thing about DQIX is that its sustained success doesn’t revolve around its name or franchise. Yeah, something like two million copies of the game sold that first week it was available, but what’s allowed DQIX to thrive (doubling its sales and remaining a pervasive presence on commuter vehicles) has been its visionary social element. It’s literally a viral form of success, as fans pass by one another and trade information, sending characters and treasures and maps into others’ games through fleeting physical proximity. This works in Tokyo, because it’s one of the densest cities in the world, and mass transit is a given; I think someone yesterday said that 60% of the population passes through the four or five busiest train stations on a given day. Here in America, that’s not really the case.

So, DQIX needs a new vector if its social elements are to work. And they need to work, because without the ability to swap data and acquire new contacts and quests from strangers, the game would be a mere shadow of itself. Beating DQIX is almost incidental to the full game experience, and certain elements of the post-game randomness enabled by the passive communication mode have passed into legend. (When I mentioned having explored surechigai tsushin mode to Bill Trinen yesterday, the first thing he asked was, “Did you get the map yet?”)

So how could this possibly work? The obvious answer, I think, is to combine the concept of the existing DQIX passive communication with the Mii Channel parade. Miis circulate virally through Nintendo’s servers, passing along to friends of friends of friends. I input 100 friend codes within the first few months I owned a Wii and haven’t touched my Mii Plaza since then, but nevertheless new Miis appear in my parade every time I use the system. It’s at something like 4,000 Miis last time I checked, and that was months ago. Of course, DQIX is for DS, which doesn’t have an always-active online mode like Wii Connect 24, but no matter. DQIX does have a wi-fi connection feature — two, in fact. One is a wireless shop whose offerings change daily, and the other is a weekly update which makes new quests and characters available every Friday for the first year of the game’s life. There’s no reason the passive communication element couldn’t be piggybacked aboard the wi-fi shop.

And there are certainly plenty of other possibilities. Nintendo-sponsored wireless hubs already dot the country at places like McDonald’s and GameStop. And, heck, there’s no reason the existing communication features can’t remain; if the game does mutate into an unlikely success, there just might be enough people carrying the game around to make it worthwhile. And let’s not forget the numerous nerd havens around the country, like Comic-Con, Otacon, and PAX. Kohler and myself and a few other people were chatting with Reggie Fils-Aime last night about a number of things including (but not limited to) DQIX. “Far be it from me to tell you how to run your business,” I said to Fils-Aime, “but it would be a really great idea to have this game out in time for PAX.” Here’s hoping. None of Nintendo’s representatives are talking about how they’re adapting DQIX just yet, but everyone I talked to did pause for a moment and look into the distance when I asked about what’s happening with its social elements before saying, “We have some thoughts about what to do with that.” I take that as a good sign.

Anyway, you can expect me to promote the crap out of DQIX in the coming months. I have no stake in it whatsoever besides believing that it’s a really fantastic game — a solid, traditional RPG to be sure, but the peer-to-peer interaction adds an enormous amount of depth to the whole experience and makes it quite unlike any other game I’ve played. It’s not the first game to employ this sort of passive, asynchronous multiplayer component — Spore has done great things with a similar concept as well — but its implementation in DQIX takes both the technology and the RPG it’s wrapped in to a new level.

Until Nintendo drops a little more info on the game, though, I hope you’ll settle instead for my arguing about Final Fantasy XIII with Kat, Kohler, and Christian Nutt on this week’s episode of Active-Time Babble. We keep the spoilers to vague statements about game flow and character arcs, so I don’t think listening to this will particularly ruin your own time with the game once it launches. Really, we’re talking more about design philosophy and the RPG’s existential crisis as they’re crystalized in FFXIII rather than FFXIII itself. Listen with confidence.

17 thoughts on “Stop Dragon my heart around”