Thy blade, forged of irony

As you probably know if you’ve poked around in the numerous articles at this site, I really like Final Fantasy XII. As in, like like. The game gets a lot of flack in certain quarters, most of which seem to revolve around its story. To me, that sounds like a point being missed, like buying an extraordinary lobster and steak dinner and then complaining because you don’t like the color of the plate it’s served on. FFXII is great because of its expansive world, its great balance of structure and freedom, and its seamless, non-nonsense combat mechanics which often turns enemies into obstacles but never impediments. Its plot is really a secondary consideration at best.

I was convinced, back in 2006, that the rest of Japan’s RPG developers would be hopping on the FFXII bandwagon, offering up countless games that built on the model offered in the most recent numbered Final Fantasy. I was sadly mistaken; instead, Japan retreated from its design, offering up either dated, bog-standard, PS2-style RPGs with shinier graphics (see: Star Ocean), tiny handheld RPGs (see: everyone), or stripped out anything resembling freedom altogether (see: Final Fantasy XIII).

At last, though, someone has spoken up about their intent to deliver a new RPG in the FFXII mold — a big, free world; seamless, automated combat; less emphasis on story. Great news, right? Well, the final kick in the pants here is that this RPG is Xenoblade, the spiritual follow-up to Xenogears and Xenosaga. Yes, my old nemeses have birthed what sounds like one of the most intriguing RPGs in years. 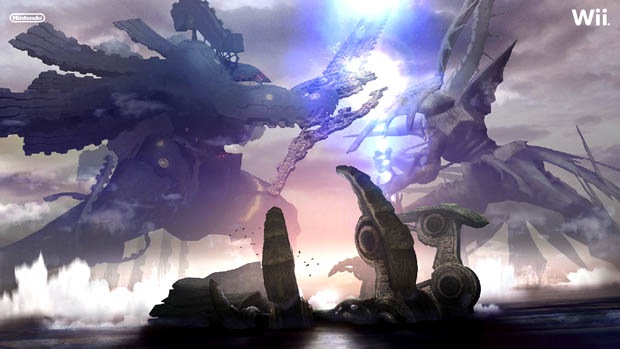 Enjoy having your laugh at my expense, Tetsuya Takahashi. You’ve earned it this time. At least I can take some pleasure in the fact that, for the time being, an image search for “Xenoblade” mostly brings up images of “X-Blades,” last year’s embarrassingly pandering action crapfest. Pettiness is my only refuge in these darkest of days.

PEE ESS: Here are some screenshots! They’re very pretty. Look at them vistas, guys. Even if these are bullshots, hot dang.

40 thoughts on “Thy blade, forged of irony”