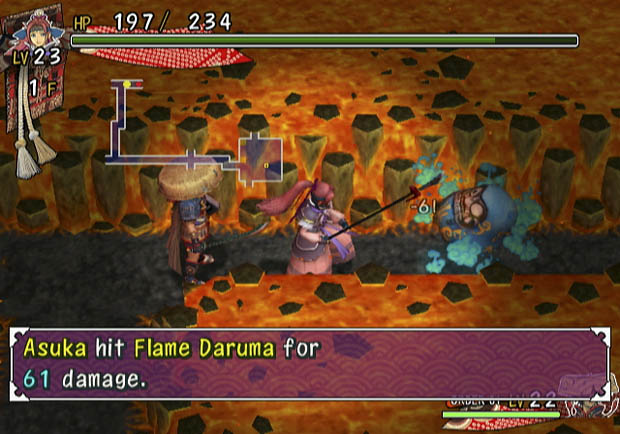 Another day, another failed pun in the blog title. This one would work if “Shiren” were pronounced the way my coworker Justin pronounces it — shy-rin — but every time he does that my ears explode in agony. Which means that I’m inflicting pain on myself with this one. I guess. I dunno, I just work here.

I mention Shiren the Wanderer because I’d noted before my intention to record a roguelike-themed episode of Active-Time Babble next week to mark the launch of Shiren on Wii. Our ATB plan still stands, but David talked me into appearing today’s episode of 4 Guys (I agreed mainly to redeem my dreadfully awful work on yesterday’s Retronauts), and I ended up going into a fair amount of detail on both the genre (which I imagine is well outside the purview of this particular show’s primary audience) and on Shiren in particular.

I’d like to take a moment to note that I played a fair amount of Shiren today and my criticism of the game in the show — about it possibly being a bit too unchallenging — has been washed away. I still haven’t seen a game over screen, but once I made it into the Karakuri Mansion, the game upped the stakes. A good roguelike isn’t necessarily one that kills you a lot, it’s one that keeps you stressed out and anxious with every step, and Shiren definitely works in that regard. I’ve found myself measuring each action carefully and constantly riding the ragged edge of loss as the monsters take my hit points down to 1 or 2 and I take a desperate last swipe in the hopes that my killing blow will be the first to connect. Shiren’s structure had me worried at first, but no: This is no Pokémon Mystery Dungeon. Chun Soft is playing for keeps.

Of course, the real star of the episode is Ray, making his debut on the show and showing the rest of us up. These days, I’m pretty much just marking time until he takes over my job.