I have a long-standing tradition with videogames that allow for custom character creation: Whenever possible, I name and design my characters in honor of my old site mascots, ToastyFrog and Rorita/Yukiko. The latter tends to be easier, because games are more likely to let you create a cute young woman more often than they are a freakish man-frog thing. 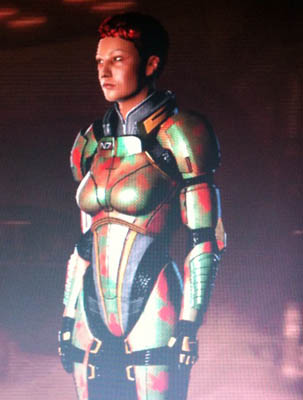 So anyway, I did my best to make Mass Effect‘s Commander Shepard — Yukiko Shepard — look the part. No pink hair option, and no Rei Ayanami hairstyle, but bright red and close-cropped did the trick. She actually did look pretty much like you’d expect an older, slightly more realistic version of Rorita to look (taking into account, of course, a swift pummeling with the Unreal Engine 3 Ugly Stick). But no ToastyFrog, alas. Ultimate, I settled for making Wrex a permanent party member, partly because he was rad, but also because he was the closest I could get to having ToastyFrog and Rorita team up to shoot stuff…. in space.

But Mass Effect 2 brings me the best of both worlds. You can customize your armor design with custom colors, so I’ve gone with a green and orange scheme with a mottled pattern. Now it appears that Rorita has killed and skinned ToastyFrog and is wearing him as a decoration. Which, let’s face it, is pretty much exactly how the comic would have ended if I had followed it through to its logical conclusion.

This may well be my favorite part of the game.

15 thoughts on “The good Shepard”