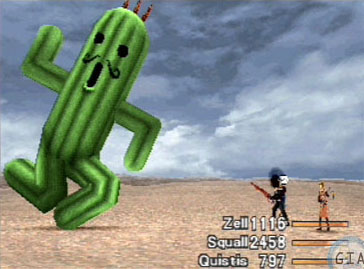 The discussion that cropped up in the wake of last week’s Final Fantasy VIII musings have reinforced my awareness that polarizing game design can sometimes be great game design. The idea sounds fairly stupid on the face of it, I suppose: If half the people who play a game hate it, how could it be good? Yet in revisiting the decade-long debate over FFVIII, I find that the content of the arguments surrounding the game is interesting. While the “con” team has its share of people who simply don’t like the game for perfectly good reasons, a significant percentage of people who criticize it don’t quite seem to understand the game — or, at the very least, they don’t seem to be taking it on the terms its developers intended. They approach the combat system from the wrong direction, they get bogged down by habits carried over from other RPGs which prove ineffective here, they write off the cast based on surface appearances or on general Internet hive-mind perceptions. The “pro” team has its foibles, too; there are an awful lot of people who will admit no fault in the game, or who try desperately to come up with insane rationalizations for its failings out of some misguided sense of chivalry. On the whole, though, the game’s fan base takes the game as it is, accepting its flaws while praising its strengths and reveling in its uniqueness.

So which side is right? Is FFVIII a ruinous mess of a game, or is it actually a commendable work? Obviously, my opinion falls into the latter camp, but not without justification. (Or so I’d like to think, anyway.) This seems a case where a game’s polarizing nature speaks well for it: The creators did something unconventional in the name of their collective vision for the game. Their experimental efforts didn’t always pan out for the best, but they were more successful than not. Gaming is a medium increasingly dominated by safe, complacent design in name of profitability. That Square would follow up its most successful work ever by something that broke so many accepted rules and practices was gutsy.

This is one of those things I have to keep in mind when I review games; I may not always like an off-the-wall or laterally designed game, but I think it’s important to be able to recognize the intent behind it. God Hand, for instance, isn’t necessarily something I think is fun. That’s not because it’s a lousy creation; it’s because God Hand a loving homage to a genre and style I don’t really enjoy. (See also: Bayonetta.) Just because a game bores to me to tears doesn’t mean I think it’s crappy… I just means I duck out of reviewing it.

On the other hand, you have Order of Ecclesia, a game in a genre and series I love — it bores me to tears, which is probably a sign that something about it terribly wrong. In theory, I should like Ecclesia, but in practice I find the developers’ decision to take the standard Metroidvania template and boost the difficulty to be poorly executed, since their attempt revolved around cranking up enemy stats rather than smarter level design or trickier AI. Being forced to chip away at the same stupid enemies I’ve been breezing through for two decades doesn’t make them more interesting, it just slows the pace, which in turn causes me to look around and realize how stagnant the Castlevania series’ design has become. It’s like the Wizard pulled back the curtain before Toto even arrived in the scene.

But then, some people really love the game, so who’s to say it’s badly designed? I keep digging away at it, hoping to strike the nugget of goodness its fans swear exists somewhere inside, but so far I’m panning nothing but gravel and dirt.

Which brings me to my current review conundrum, Sands of Destruction. I ducked out of the Ecclesia review without even knowing how conflicted I’d be about the game, but I volunteered to review Sands out of sheer curiosity. It’s like the mutant offspring of Xenogears, the very definition of a conflicted game. Despite my using Xenogears as a whipping boy for so long, I don’t actually hate it — I just found the flaws it possesses to be unusually infuriating. Still, I’ve always felt that the concepts laid down by the game could be revisited to create a genuine masterpiece. You know, with a little more polish and a lot less ambition that results in a rushed tumble through the second half of the story through a wall of static text. Maybe, I thought, Sands would be that masterpiece.

Turns out it’s not. It’s not even close, in fact! It is, however, a very bizarre piece of work that feels more like a distorted echo of Xenogears than an actual follow-up. At the same time, I’ve already had a debate with someone about the merits of its combat system, among other things. So, I suppose I need to keep all of this in mind as I enter the back half of the adventure. Is it a broken mess or a madly inventive work of genius that defies convention? I can’t decide just yet.

I can say with certainty that I don’t hate it, though. Sands feels exactly like a second-tier 32-bit RPG that fell 12 years through a time warp to land in 2010. I didn’t even realize I was nostalgic for that particular niche of gaming, but apparently I am!

24 thoughts on “Nobility in polarity”