Dang, this blog series is dragging. I gotta wrap it up before 2010 is over.

Huh, I’m not sure I have much else to say about this game, come to think of it. I recently wrote an article about it, and I talked about it at length on the episode of Active-Time Babble we recorded today. And really, my original review of the game was probably sufficient, if you want to be completely honest. But let me try anyway, however briefly. 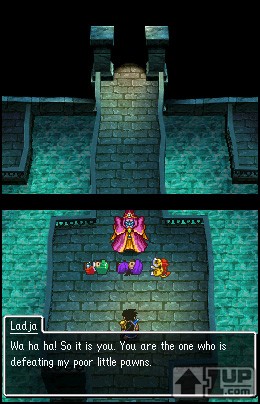 Dragon Quest V is a remarkable game: It is very simple and completely predictable in every way except for how powerful and moving such a simple and completely predictable RPG can truly be. Yuji Horii and Chun Soft really established the Dragon Quest series’ nature with this game, originally released for Super Famicom (Super NES) in 1992. See, when Final Fantasy went 16-bit, it completely reinvented the series’ battle mechanics and narrative presentation, adopting pseudo-real-time combat and an unprecedented focus on a linear plot and characters. Dragon Quest V, however, was… pretty much the same as Dragon Quest IV. The one real gameplay innovation it offered was the ability to recruit monsters into the party, and Megami Tensei had already trod that ground on Famicom a few years prior. There was nothing new about DQV, really! It was practically the antithesis of what a 16-bit game should be. Heck, it even looked like an 8-bit game.

What DQV lacked in mechanical innovation, though, it more than made up for with — yes — heart. It’s a heartfelt game, it tells a moving story, and it’s clearly a labor of love. Its most memorable moments are alternately heartwarming and heartbreaking. Falling in love even factors heavily into the story; you are literally unable to destroy the game’s main villain without doing it. Yet unlike other games that claim to be emotional and go about proving it by hitting you over the head with sentiment at every turn, DQV prefers to be understated. It lets the player experience the life of a man who plays an important role in destiny’s grand scheme; his life is inextricably interwoven with a mission to save the world, and by allowing you to play out the whole of his quest you also experience the whole of his life. Family and friendship are integral to the tale. It is a thoughtful game, and unlike most RPGs, I think its story is the sort of thing you’ll appreciate more as you grow older.

The DS remake is actually the second remake of this RPG, so clearly I’m not the only one who fell in love with it. It is, however, the first to reach America… and from what I understand, we received the definitive version. In any case, this is a game that belongs in the library of anyone who enjoys RPGs. And of anyone who claims to care about meaning and humanity in their videogames. DQV is a quiet masterpiece.