Even if you don’t like it, even if you think it’s awful and broken, you can’t honestly say it’s not interesting. Like I said in last week’s Retronauts, I really admire the creative team behind the game for using the insane success of Final Fantasy VII as a platform to try out new and untested RPG concepts rather than simply say, “Hey dudes, here’s Final Fantasy VII Part 2!” FFVIII was the most different entry in the series since Final Fantasy II (by which I mean the Japanese one on Famicom, not the mislabeled Super NES game, of course). And FFVIII’s wacky new ideas worked out a lot better than FFII’s. But both had a common origin: Taking a logical approach to explaining RPG mechanics — or, if not an expressly logical approach (because how much sense does it make that everyone stands in place until their turn comes up, really?), at least an internally consistent approach. FFVIII’s mechanics were all explained within the the game world, so even when things didn’t work the way your experience with RPGs dictated, they still worked within the context in which they were presented. 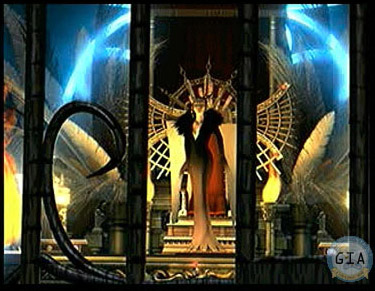 That is good game design — or at least, good game design philosophy. I do think FFVIII was bogged down by bad design trends popular at the time — overly lengthy animations, overly linear dungeons, some iffy and generally unfriendly interface design. But I’m willing to forgive a good game despite its contemporary limitations, just like I’m willing to forgive a band I like for throwing in soon-to-be-dated sounds or production values to feel “modern” so long as the underlying music is good. Heck, sometimes those dumb decisions work in their favor: Yes’s Tormato is a generally mediocre album bogged down by the ennui of the late ’70s, but the tremendously dated harmonized bass and offbeat, disco-esque drums make the album’s sole stand-out track, “On the Silent Wings of Freedom,” a uniquely energetic work within the band’s oeuvre.

FFVIII’s use of Guardian Forces — summoned beasts with extremely drawn-out animations and high power — is a bit like those melodic basslines and tense drums. Used improperly, they’re just awful. They drag the game to a halt, turning random encounters into exercises in boredom. But if you don’t take the obvious methods and instead minimize your reliance on GFs in combat, they actually serve to open up the game to a wild number of alternate approaches. Sure, you can play FFVIII like you played FFVII, but it’s probably not going to be very interesting. On the other hand, you can make use of the abilities that the GFs offer behind the scenes — the power to transform enemies into cards, the almost alchemical techniques that let you transmute items into magic or other items, the freedom to apply elemental or status characteristics to your offense and defense — to approach FFVIII in whichever way best suits you. Its Junction System offers a ridiculous amount of freedom. 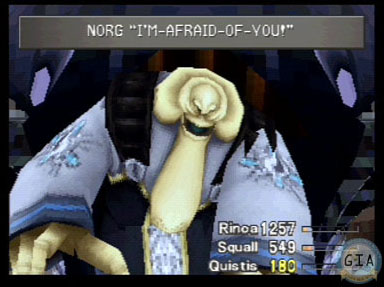 Unfortunately, JRPG fans are often frozen like deer in headlights when confronted with flexibility and the opportunity to make their own decisions. The genre has long had a habit of railroading you into very specific paths and play patterns, yet FFVIII defies that tendency. As a result, it’s not a game that’s well-suited to people who have to do everything in a game, because there are items that can only be acquired by sacrificing other items, as well as alternate party-building strategies that are mutually exclusive to one another. Casting magic might cause your stats to drop by a point or two, and then you couldn’t have a perfect team! Quel horreur!

My advice: Just relax. FFVIII isn’t perfect. The lead character is a mandatory jerk — the game seems to delight in punishing you for choosing dialogue options that soften his blunt rudeness — and his love interest is about as appealing as waterlogged spongecake. Some of the dungeons are dumb, and the playtime-extending plot devices are even dumber. But it all takes place in a fascinating world whose history is carefully integrated with the play mechanics and the main party’s own stories. Combat can be as energetic or as tedious as you like. And as for completist tendencies, well… just take a roguelike mindset to the game. FFVIII gives you so many different ways to make use of your vast inventory of items and spells, so it’s really sort of missing the point to hoard it all. Chill out, take a casual stroll through the game, refine those rare Triple Triad cards, cast those spells junctioned to your HP stat. It’s all good. Or at the very least, it’s all interesting — and if you approach it with the intent of seeing just how far you can bend the game to your own will, you might just find it’s one of the most appealing and enjoyable games in the Final Fantasy series.