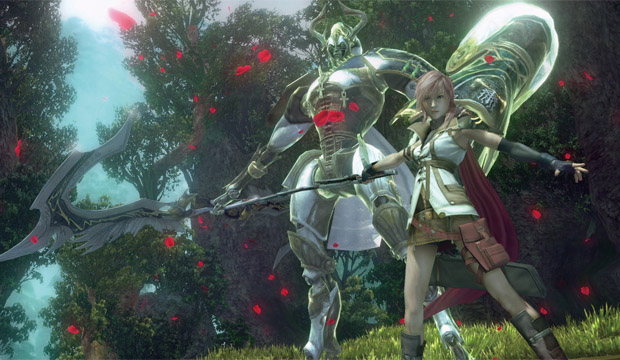 This is due in no small part to it being available only in Japanese for the time being, of course. The breakneck pace of combat (you can just forget about the possibility of the old Wait mode of former iterations of ATB or, god forbid, actual turn-based combat) means my slow-as-Christmas Japanese literacy turns each battle into a fatiguing experience. Things are happening at a rapid real-time clip whether or not my brain is up to the task of parsing them in at real-time speeds. And then I keep getting distracted by dumb things, like the way the game’s Enhancer skill set (a combination Green Mage/Time Mage who dishes out buffs) all comes from Final Fantasy Tactics terminology, with spells like Brave, Faith, and Guts. And then I start thinking about how rad it would have been if Matsuno had directed this game. And, well, it all goes downhill from there.

But FFXIII is also exhausting because the whole game is paced exactly the same as its battle system. It just won’t let up! Its linearity has been decried far and wide, mostly (I’m guessing) by people who haven’t been playing a lot of Japanese RPGs these past, I dunno, 20 years or so and never got the memo that a significant percentage of the nation’s role-playing output is basically an amusement park ride in which the director plants his hand firmly on the small of your back and shoves you through a whimsical adventure at high speeds. A lot like America’s post-Half-Life first-person shooters, in point of fact. The main difference between FFXIII and, say, Shadow Hearts: Covenant is that you don’t have to solve any stupid puzzles along the way. (Final Fantasy got those out of its system with Final Fantasy X, which of course is the game that Covenant was shamelessly aping. God, it’s all so incestuous.) Which isn’t too say I’m entirely crazy about the tube-and-tunnel approach to RPG design of FFXIII and many, many of its kin — I prefer taking my time, thanks. “Taking your time” in FFXIII means doubling back along the path you’ve been traveling for the past x hours to fight the same enemy mobs you just beat at the exact same spawn points they previously appeared at.

This combination of Japanese text and Japanese structure fully account for my weariness with the game. I normally make it 20 hours into each Final Fantasy import before feeling satisfied that I’ve seen enough to tide me over until the U.S. version arrives, but my mixed feelings about FFXIII — I love many parts of it, but really wish I could play it my way instead of in the manner predetermined by Yoshinori Kitase and Motomu Toriyama — are compelling me to throw in my hat at only half that distance into the game. (That the U.S. version hits in two months does make this an easier decision to settle on, I have to admit.) In the meantime, I’m getting a placebo fix by revisiting an old favorite on PSP: Final Fantasy VIII.

I wasn’t entirely certain I’d enjoy FFVIII ten years on. I was kind of amazed by it back in 1999, but I admit that much of that amazement probably stemmed from the times and circumstances and novelty of it all. It was the first text-heavy RPG I tackled as an import, which is to say that I thought it was so fantastic-looking that I imported both the demo and the full Japanese release. The hype for the game coincided with the heyday of the GIA, which was run by fellow shameless FFVIII mark Andrew Vestal and thus devoted ridiculous attention to every scrap of FFVIII news to trickle out of both Japan and Square EA. The game was a landmark visual achievement, and it cast aside countless hoary RPG clichés in favor of a wholly reconsidered slate of mechanics that actually made sense within the fictive context of the game’s world. Inasmuch as transforming a monster into a trading card and transmuting that card into magic spells could make sense, I suppose. FFVIII was a daring attempt to redefine how the RPG works — not unlike FFXIII is doing, a decade later.

And much like its successor, it annoyed a lot of people. That annoyance, it should be said, stemmed from reasonable places. FFVIII is burdened with a large number of concepts that just didn’t pan out like they were supposed to. It’s hampered by technology, with atrocious load times that make the frequent random encounters hair-pullingly slow. The Junction system reduces the cast to even bigger mechanical ciphers than the cast of Final Fantasy VII; with their combat skills being almost completely mutable and instantly interchangeable, they are defined almost entirely through their personalities. Which, sadly, are lacking. I tend to be less forgiving of such things now, so I booted up FFVIII on PSP last week with some trepidation.

Much to my surprise, I’m ten hours into the adventure, and I’m still loving the game. I have a feeling I’m in the minority with this, though. I fully intend to inflict my opinions upon you all… but right now, I’m at the threshold of Galbadia Garden, and if memory serves I have some hockey players to beat the crap out of shortly. Priorities, man, priorities.