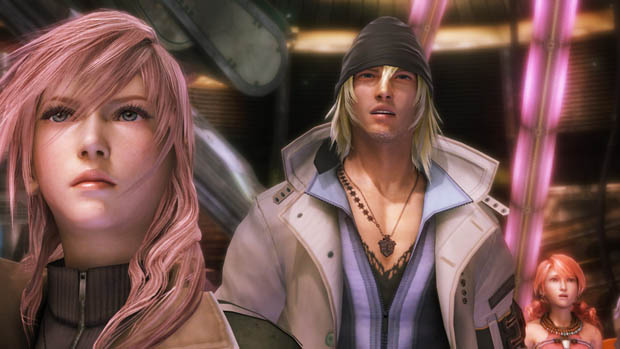 I’ve been playing a lot of Final Fantasy XIII this weekend. It’s been a while since I’ve done a play-and-preview game marathon — I guess maybe since the last Final Fantasy launched in Japan? — but it’s not as easy as it used to be. I think my brain is ossifying as I age, or something. I suppose I’m also a little bit fatigued because of the relentless pacing of the game; I like a little freedom to go at my own speed, but so far it’s been seven or eight hours of literally walking down hallways. They’re very beautiful hallways! They sometimes look like mountains or oceans of crystal or futuristic highways! But they’re narrow corridors, and I’m the sort of person who enjoys a casual pace in an open world where I can go about my own business on my own time.

On the plus side, I guess, people who hated Final Fantasy XII are gonna love FFXIII.

Despite my grousing, though, I’m enjoying the game in the aggregate. The structure isn’t my cup of tea, but combat is almost like an interesting puzzle, and danged if the game isn’t just completely gorgeous. Wish I had more reason to linger and enjoy the sights, but every time I do Sazh or Vanille jabber at me to hurry up in their curious foreign tongue. Worst tour guides ever.

9 thoughts on “The unluckiest number”