Someone called me out on the fact that the first two entries in my favorite-games-of-2009 recap are not available to the general American game-playing public. This is not my fault! If I had my way, Americans would have the right to a chicken in every pot, a car in every garage, a localized version of 7th Dragon in every DS, and a copy of Edge readily available for purchase on every iTunes Store. But I don’t call the shots. However, I can perhaps make up for my unfortunate drift into inaccessibility with this entry, which is a tiny paean to a big-budget blockbuster that has been eagerly crammed down our throats for several months now. 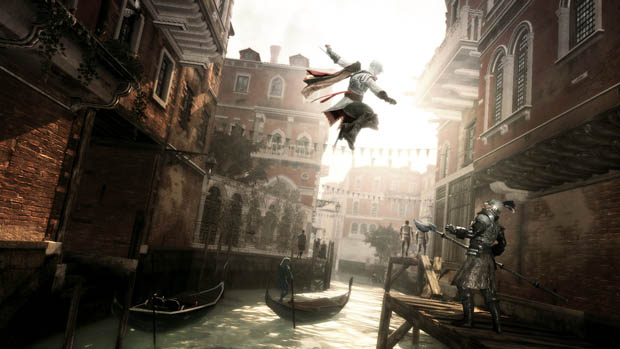 So, Assassin’s Creed was a pretty interesting idea for a game, letting players control an assassin in the times of the Crusades. And by assassin I mean assassin, as in hashashin, as in a politically-motivated Muslim battling against the incursion of European Christian warriors into the Holy Lands. Not only was the setting awfully daring, but so were the game mechanics: Despite it being an action game, you spent a lot of time using “social camouflage” by blending into crowds; and the player’s character did a lot of heavy lifting for pathfinding AI for you, to allow you to feel both in control and awesome all at the same time. Maybe unsurprisingly for a game so ambitious, Ubisoft Montreal kind of boned it and didn’t really get it right. Assassin’s Creed was quite a mess of a game, a big and interesting world with fascinating story and gameplay concepts that forced you to do the same annoying routine over and over again.

Assassin’s Creed II, however, gets it right. Oh, it still has its flaws, but there’s so much more variety and freedom of play and general polish that it makes the idea of going back to play more of the original seem physically painful. In fact, there’s a brief flashback sequence in Creed II in which you briefly see Altaïr, the previous game’s protagonist, and it makes you realize just how plain and underdeveloped both the prior hero and his game were.

It’s been a while since I’ve really liked a videogame character, because they’re generally not written very well. The hero of Creed II, however, is difficult not to like. The first few hours of the game are a bit slow-paced, but that’s simply because they’re defining who Ezio is — or rather, who he was. He begins as a rowdy, callow young man from a wealthy family, thrust by politics and circumstance into a fight-or-flight response. He picks “fight,” which makes sense; this is Assassin’s Creed, after all, not Milquetoast Coward’s Creed. Ezio grows as a character over the course of the story (which spans about 20 years, although the only real indication is that the hero gets stubblier toward the end), and you follow him as he learns to kill and to respect the dead, however villainous they’d been in life. There’s a touch of humanity to Ezio lacking in pretty much any other character I’ve seen in modern, hyperviolent games like this — you’re killing people, a lot of people, but the dialogue specifically calls Ezio out for taking vindictive satisfaction in their deaths.

Of course, that is made a bit hollow by the fact that some of the combat animations — like disarming an axe-wielding knight by kicking him in the crotch before sinking his own axe into his foot and skewering him through the face — are grotesquely, viscerally satisfying. But whatever; we can debate the hypocrisy of videogame violence elsewhere. The important thing is that Ubisoft Montreal took pains to make Ezio a warm, empathetic character, someone you like as much when he talks as you do when he jumps across rooftops and quietly sinks a dagger into an enemy sentry’s back.

Creed II takes place in Renaissance Italy, and the developers went to extensive pains to research the setting and create a historically accurate rendition of the place (enough so that I was able to find my way to a building I couldn’t track down with in-game cues by checking Google Maps); so while it may seem contrived to team up with Leonardo da Vinci and have a fistfight with the Pope and get a pep talk from Niccolò Machiavelli, at least those guys were really alive right then. I didn’t think I’d like Italy as much as Crusades-era Jerusalem and environs, but it was by far a more colorful setting. And, admittedly, the developers did a much better job of constructing the cities, and of giving players things to do within those environs than in the first game. While I missed the freedom to travel from town to town, I can’t deny that the elements excised for the sequel were fatty bits that needed to be trimmed; instead of looking for flags and Templars in otherwise empty areas, I spent that time enjoying fireworks at a gala festival.

I guess the real proof (for me) of Assassin Creed II’s improvements come down to an accusation Penny Arcade’s Gabe — a die-hard apologist for the first game — made a couple of years ago: He blamed Creed’s uneven scores on the fact that it was a game that needed to be savored a morsel at a time, which people rushing to review it for deadline couldn’t do. But I played the first Creed on my own time at my own pace, and still found it interminable; yet I played Creed II on a deadline for review (and in one of the most stressful periods of my life, at that)… and I thoroughly enjoyed it.

Pity about the fact that they left the game unfinished so they could sell us DLC, though.