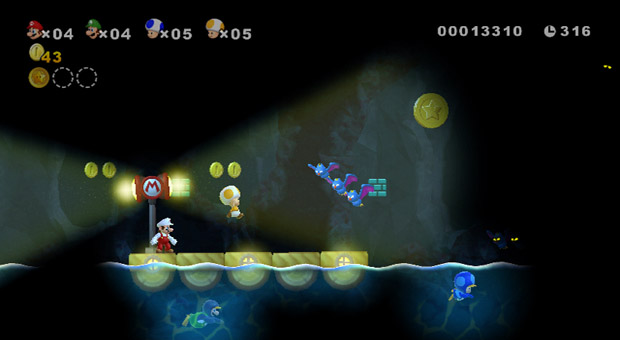 One of the core tenets in my highly positive review of New Super Mario Bros. Wii is that much of the game’s success is the result of Nintendo’s brilliant balance between challenge and accessibility, using the seamless single- and multiplayer level design convergence to provide a game that’s as enjoyable for experienced gamers as it is for novices. Much of my “reference material” for this opinion was a few hours spent working through a cooperative session with my fiancée Cat, whose relationship with games is one of bemused tolerance. I pay our rent writing about them, so she’s OK with their existence, but she doesn’t have any particular interest in playing them. From time to time she’ll try whatever it is I’ve been playing through out of curiosity, but after an hour or two she’ll grow bored and hand back the controller.

NSMB Wii, however, has proven itself to be something of a gateway addiction for her. Once the game launched, we played with Cat’s cousin and her cousin’s fiance. I left my copy of the game at the cousin’s place, because she’s been feeling lousy lately and needs whatever distractions she can find (and it did the trick; when when we went back over a few days later, they roped us into helping them through the final stage), and I figured Cat wouldn’t care. But I was mistaken, and much to my surprise she wanted to play more. So I gave her my copy of New Super Mario Bros. for DS, which she powered through over the course of a couple of weeks. I’d help from time to time, which usually consisted of her getting stuck at a tricky part for an hour or two, then handing the system to me and feeling frustrated that I could breeze past those sticking points on my first try, when they’d caused her so much trouble.

The weird duality of the original NSMB made me appreciate what the sequel does all the more. Long-time Mario fans almost universally agree that the DS game is ludicrously easy; the only real challenge for us comes in earning all those big coins. Yet for someone new to platformers — Cat’s frame of reference for games consists of things like Q*Bert, Lode Runner, and Pac-Man, games that well predate the standards of platforming established by Super Mario Bros. — NSMB is almost impossibly tricky in places. It’s sold insanely well, sure, but I think most of NSMB’s success can be attributed to its brand and the fact that classic-style platformers are in fact a legitimately different form of gaming than their 3D offspring and people still enjoy playing them, despite what publishers seem to have arbitrarily decided a decade ago. NSMB Wii is simply a better-designed game all around, and its accomplishments are all the more impressive the more I contextualize them. It really should be impossible to create a platformer that satisfies the lust for challenge endemic to fans of classic platformers yet which also allows a new player to ease in and feel comfortable, yet NMSB Wii does precisely that.

So far as I’m concerned, that doesn’t just make it a great game; it also makes it the embodiment of everything this entire console generation aspires to: Bridging the divide between dedicated gamers and those who take a more (sorry, I can’t think of a better word) casual approach. Nintendo’s been more overt about it, but even the AAA blockbuster games on other platforms have succeeded largely on their ability to cater to both audiences. Look at Assassin’s Creed, which looks gorgeous and has lots of traditional videogame conceits, but also practically plays itself. Look at Halo, which turned the first-person shooter into a sequence of forgiving, bite-sized encounters with streamlined controls, health systems, and weapon mechanics. Look at how eagerly Microsoft and Sony are pursuing motion controls as some sort of silver bullet to fend off the evil werewolf that is Nintendo. NSMB Wii spans this divide, and it make the effort look painless and incidental. It’s a masterpiece, and I’m disappointed that so many reviewers focused on the fact that NSMB Wii’s control mechanics and visual language are familiar and well-explored, because I think they failed to see just what the game truly accomplishes. So it goes. We gamers tend to develop tunnel vision sometimes, and it’s easy to be blindsided by something that achieves greatness in unconventional ways. I’m kind of lucky that my better half doesn’t give a fat slap about this entire medium; it keeps me on my toes.

Meanwhile, I really need to get my copy of the game back. Not that Cat cares. After making it to the final level of NSMB on DS (and finally giving up after being unable to beat that stage in hours and hours of play), she decided to try out Super Mario Bros. 3 (she doesn’t like the physics) and Mario World (which she likes, but finds dauntingly difficult). I suggested Super Mario Galaxy, which — after a few hours adjusting to the concept of playing truly 3D space — she adores. I figured she’d appreciate that the 3D Mario games are like a playground full of things to do as opposed to the regimented obstacle course of the 2D installments, and I was right. She was actually excited when I told her there’d be a sequel to Galaxy out in a few months, which really surprised me. 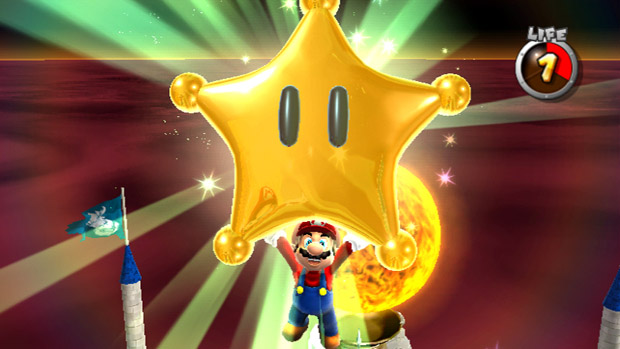 We’ll make a game fan of her yet, and all thanks to NSMB Wii. If that’s not a sign that Nintendo got it right, I can’t imagine what would be.

16 thoughts on “The Mario seduction”