This is not the cover to GameSpite Quarterly 3 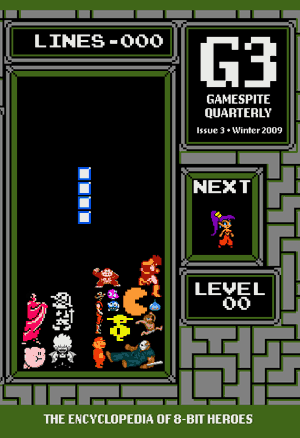 The press proof for GameSpite Quarterly 3 arrived yesterday — much sooner than I expected, in fact. The near-final product looks pretty good, and it’s crazy dense. I’m talking 300+ pages. It’s a lot of text.

Unfortunately, I hate the cover. The idea was pretty good, I think: Since this issue focuses on 8-bit game characters (specifically, heroes), I wanted to use original sprites for a sort of Retro Gamer-looking creation. And the layout of Nintendo’s NES Tetris struck me as a perfectly fitting visual metaphor, since Tetris is a wildly popular 8-bit game, the stats box in the upper-right is perfectly placed to hold the magazine flag, and the I-Block is one of the characters detailed in the issue. So why not have the I-Block poised to clear a stack of 8-bit characters all jumbled up?

Not a bad idea at all. Unfortunately, the execution… well, it sucks. So, this won’t be the cover to the issue. It’s ugly and kind of embarrassing and I certainly wouldn’t expect people to spend their hard-earned money on something this tacky. So I worked up something else — something classier, simpler, cleaner, and weirdly enough designed in a flash of inspiration this afternoon when I bought a piece of cheesecake to take home to my finacée and looked at the bag it came in. You can have a look after the jump.

Much better. And! I’ve decided what to do about the cost/content problem: As you can see, there will be three versions of this issue, each with a different cover. (They are not intended to be collector’s items, so please don’t think I want you to buy all three. God, no. Just one. One is enough.)

The hardcover version, as usual, will contain all content and be fairly expensive, because, well, it’s hardcover. They don’t make those for cheap. The paperback version, however, will come in two variants. For the frugal, a 150-page edition that sells for the GSQ target price of $12. It will focus on well-known characters, leaving obscure heroes like Jay McCray and Steve Hermann and the like on the cutting room floor. For the spendier types who don’t want to sink cash into the hardback, there will also be a complete paperback edition minus some of the extra articles — probably about 280 pages — that will sell for somewhere between $16-18.

The book will go on sale on Black Friday. It’ll be done sooner, I imagine, but this gives me a slightly relaxed deadline for doing copy editing and finishing up photography and such. So please look forward to next week.