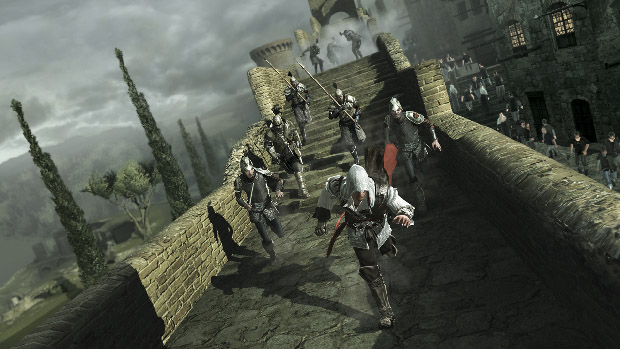 I had a troubled relationship with Assassin’s Creed. You can read my review of the game from way back when to refresh your memory, if you like, although really a lot of the bigger problems troubling our relationship exist outside the continuum of the game itself. Suffice to say there were certain disagreements to which I was merely a sideline-based observer, disagreements which actually prompted me to play the game through for myself when I hadn’t really intended to pay it much attention to begin with. And what I found was a game that was roughly 80% complete, and in a confusing way: The tech and the environment and the art, by reputation the most expensive and difficult parts of a game to create, were just about rock-solid. But there was very little of interest to do in those beautifully-rendered cities of the Middle East, almost as if the creators forgot to actually include a game with their tech. I actually found myself wanting to like the game, but at every turn it seemed to make an active effort to prevent me from doing so.

Anyway, the point is that when I say the sequel is a much-improved experience by a matter of leaps and bounds, you need to understand that my saying so means something.

I didn’t have room to include this in the review, but Ezio is pretty much Renaissance Batman, and if it weren’t for Arkham Asylum having redeemed the Batman game franchise a few months back, I would happily call Assassin’s Creed II the greatest Batman game ever. Really, all it needs is a giant penny in Ezio’s mansion to make it perfect. Giant florin. Whatever.

And I’m not kidding about the game’s plot. It’s seriously like Ubisoft said, “Hey guys, what if Dan Brown wrote a Japanese RPG? What would that be like?” And then they went and gave it their best effort. It’s a little weird! But kind of fun, actually, just because it’s so ridiculous. Especially the final battle, which lets you do something JRPGs have been nervously flirting with for more than a decade.