It hasn’t taken much time at all for retro-flavored graphics to go from a refreshing relief to a source of deep cynicism. That very cynicism is precisely why I’ve more or less ignored Half-Minute Hero since about 30 seconds after it was first announced in Japan as Yuusha 30. A gimmicky pile of tripe begging for attention by pretending to be 8-bit — how completely lame.

This was a mistake, and I apologize. I finally tried out Half-Minute Hero tonight, and while I’ve only scraped at the tip of the pixellated iceberg, I’m really impressed with the game. Where an increasing number of games use pixel-heavy visuals out of laziness or bandwagon-hopping, it serves a different purpose here. 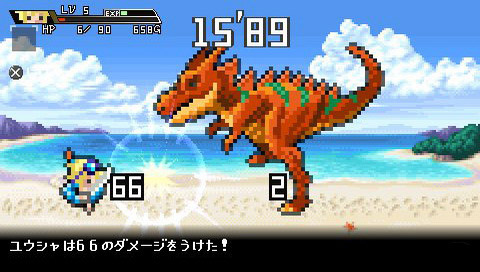 In Half-Minute Hero, those lumpy, bumpy pixels symbolize the game’s core concept: Condensing the gameplay and mechanics of an 8-bit RPG into a fast-paced action game. The entire concept of “RPG” is reduced to a series of streamlined battles, simple dialogue, and minimalist gear and leveling systems. Players have no control over how battles play out; they’re kinda like automated Hydlide in a side-on view, and victory comes strictly through brute force via rapid leveling.

It’s not entirely unlike Progress Quest on some level, though it’s less of a joke and more of a… well, it’s not quite a puzzle game, and it’s not fully a strategy game. But it makes use of the parts of your brain that you need to negotiate those genres, stripping the role-playing concept down to a series of brisk actions. Towns consist of a single-screen strip of land with a couple of villagers waiting to deliver a line of dialogue, and a single more powerful weapon or piece of armor than was available in the previous chapter. Basically, a typical console RPG, minus all the boring crap that stretches RPGs to 40-60 lengths. 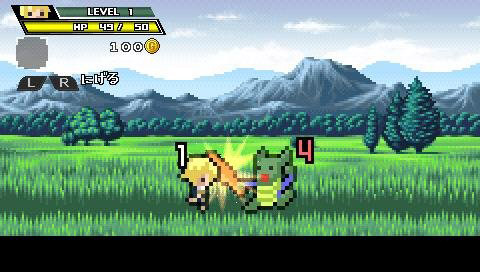 This reductive approach to game design makes its retro-inspired pixel art a perfect fit. It’s not about bandwagon-hopping or trend-riding; it’s about communicating the feel and premise of the game in an intuitive and effective way. It’s RPG by way of arcade sensibilities, and it looks like an old arcade game. Visuals any more complex than these would seem terribly out of place, and would probably actually get in the way.

I’ve only played a handful of missions, so maybe it’ll ultimately prove to be a stupid, shallow mess in the long term! But at the very least, Half-Minute Hero demonstrates an unexpectedly effective synthesis of visuals and concept. It’s always a pleasant surprise to see someone biting the old-school style for a reason.