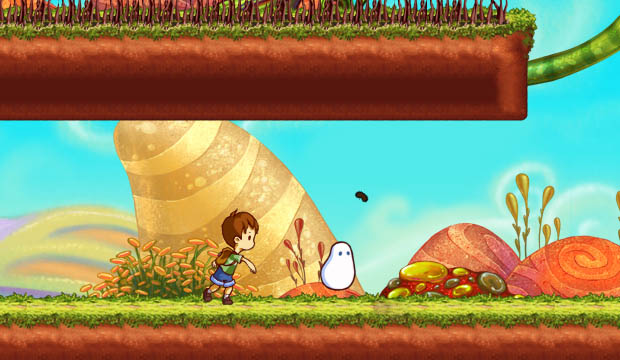 As I mentioned in my 1UP review of A Boy and His Blob, a lot of gamers have a dire view of hand-drawn visuals. They see a 2D game and immediately dismiss it; if it ain’t a DLC game, if it ain’t ten bucks or less, it ain’t a good deal. Are you one of these people? If so, come closer. No, closer. There. Now, stand still.

Now, you may be wondering why I’ve just kicked you in the genitals. This is a reasonable question, but it has a simple answer: It is because you are a terrible person and I do not think you deserve to procreate. I have just weeded your foul seed from the gene pool. I’m sorry, but it needed doing. 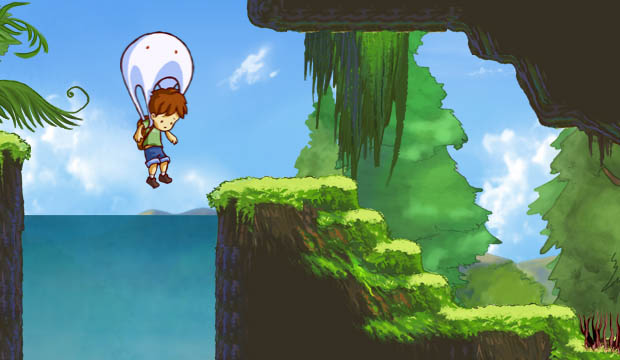 Also annoying: The pervasive mindset that downloadable games are somehow less worthwhile than retail games. In truth, the ratio of cream vs. crap is about the same regardless of medium — most things are terrible, and the relatively rare good stuff is worth celebrating no matter what form it takes — so that’s a meaningless dichotomy to begin with. But it becomes even more irritating when you consider the aforementioned collective dismissal of 2D graphics and apply the logical transitive conclusion to these assumptions: that is, 2D games should be downloads; downloadable-only games are worthless; ergo, 2D games are worthless. This is not acceptable.

There’s nothing about 3D games that’s inherently better or worth more than 2D games. But that doesn’t mean 2D games are automatically superior, either. That’s just silly. Some games work better in one format than the other, and I always appreciate a developer who knows which approach is best for a given project. I hate playing the early Grand Theft Auto games, because the top-down view was inadequate for what DMA was aspiring to. Truth be told, I even kind of like Dragon Quest better in 3D, despite the fact that it’s such a traditional series — the dynamic camera angles of Dragon Quest IX are a simple embellishment, but they make the battles much more interesting. On the other hand, something like Symphony of the Night or, obviously, A Boy and His Blob is going to be a lot more fun in two dimensions. Of course, the Mario games are probably the shining example of knowing which format is best for the job: Super Mario Galaxy couldn’t possibly work on a flat plane, and New Super Mario Bros. would have been a disaster if EAD had tried making it some over-the-shoulder mess. 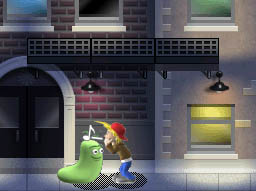 Of course, one need look no further than the previous version of A Boy and His Blob — the ghoulish DS atrocity that thankfully died a quiet death after its E3 showing several years ago — for an example of how using the right format for the job can still go horribly wrong if you misuse that format. No offense to the person who designed Blob’s DS graphics, but I sure am glad the game ultimately ended up in the hands of WayForward, a company that really respects the artistic merits of the medium.

The version of A Boy and His Blob we did get, the one on Wii, is really a lovely game, a children’s picture book come to life. It’s charming through and through, with countless little animations to give life to the characters. Every level has incidental life crawling through it, worms and bugs and fireflies and weird little… blob things on Blobolonia — something generally lacking in all games. It goes a long way toward making the world feel alive. And like I said in the review, it stands apart from most lush hand-drawn games by offering actual substance beneath all that beauty. There’s a lot to the game, probably a good 20 hours of play (at least) if you want to complete all 80 stages. And it’s challenging! And fun! 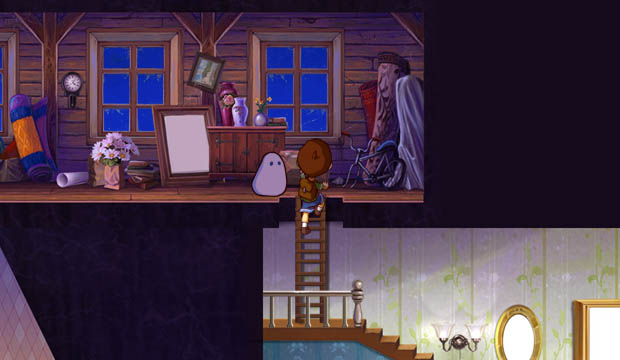 It’s a shame the game faces an uphill sales battle because it’s lovingly hand-crafted to resemble a Disney movie rather than built from rubbery (and probably not especially charming) triangles. But who can fathom the mind of the average gamer? I’m pretty sure that everyone except me is crazy, so I don’t even bother anymore. Anyway, the point is that A Boy and His Blob is great, and lovely, and anyone who poo-poohs it as an overpriced bit of fluff that should have been a download-only game is never allowed to have babies.

35 thoughts on “2D: Crisis of confidence”