After being unceremoniously awakened by freak weather this morning — we had lightning, thunder, and hail, the former of which happens in San Francisco once or twice a year at most, while the latter occurs maybe three or four times a decade — I decided to put my morning to good use. So, I sat down with a pen and a stack of envelopes and prepped all the subscriber bonus books to go out in the mail. I’ve already made one trip to the post office to drop off the first batch, and here’s the rest — 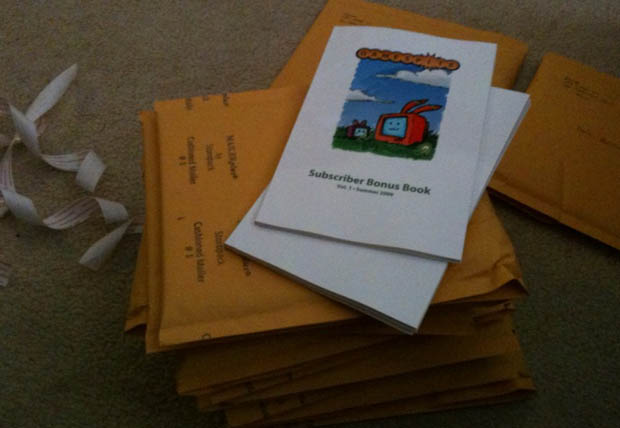 — all but two of which will be in the mail very shortly. Those two are missing mailing addresses, see.

The cover says “Summer 2009,” so I was determined to get these to their recipients before summer ends. They were supposed to go out a month ago, but my schedule never seems to work the way I want, and they’re running late. As always. By way of apology, I inscribed each of them with a random doodle of a creature from the GameSpite bestiary. Yes, I drew in the books. They’ve been defaced and their aftermarket value will plummet. My apologies for that.

I still have about 20 copies left over, which I will be more than happy to sell to people. The price is going to be pretty steep, though: $36. ($38 outside the U.S.) “Th-that’s highway robbery!” you sputter. And it would be! If not for the fact that most of that money — $20 per copy sold — will be going to Child’s Play. If we can sell through all 20 of them, that’s $400 bucks to brighten up some kids’ lives. It’s a tiny drop in the million-plus-dollar bucket that Child’s Play normally raises, but I am happy to be the catalyst for any drop in such a worthy bucket, however minute the drop may be. (Half the remaining $16 pays for the cost of the books, padded envelopes, and postage, while the other half goes into the GameSpite war chest for server fees, which is the point of the whole “site support” thing to begin with.)

Please drop me an email if you’re interested. The book contains reprinted comics from the past ten years of the site, along with the standard self-effacing commentary that goes along with such things. I hope to have the next book out around the end of the year, and I suspect it’s going to focus on a more fleshed out GameSpite bestiary. But we’ll see.

5 thoughts on “And they’re off”