My final printed copies of GameSpite Quarterly 2 and the subscriber bonus book have arrived. And they look so, so good. I hadn’t seen the final color cover in print until just now, but it made my eyeballs explode in happiness. Especially the matte “imagewrap” hardcover. If you ever wonder why we do a separate hardcover deluxe edition, that is why. The non-glossy color looks so rich and amazing. Thanks again to Mr. Armstrong for the phenomenal cover art. 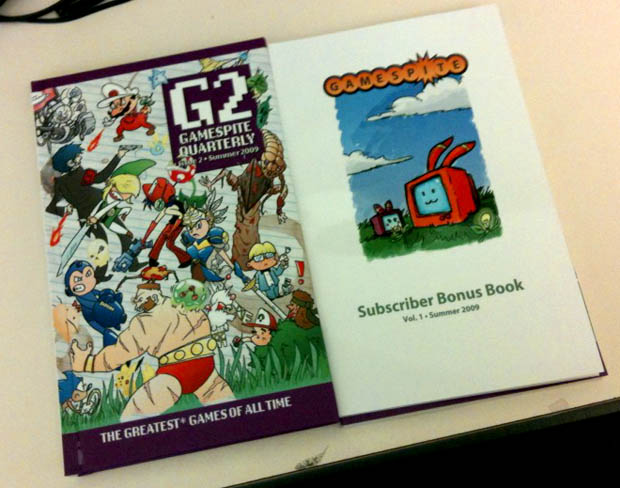 I’d like to show off how amazing the books look, but… the sickly lighting in my storage closet “office” does terrible things to the iPhone’s camera. Sorry about that. Please take me at my word when I say the book is utterly and completely gorgeous, though. (The contents ain’t too bad, either.)

I will be mailing out the bonus books, along with the comped copies of GSQ2 I owe various special contributors and the last few hardcovers of Year One, Vol. 1 I pawned off a while ago, just as soon as I return from PAX next week. If you’re due a bonus book and will be at PAX, though, please leave a note in the comments and I will hand-deliver your copy in Seattle, assuming you can find me. I’m sure you can track me down pretty easily if you know where to look.

And now, for something completely not different at all:

X-Com: UFO Defense
The reader-defined nature of this issue of the magazine made for a few surprises, and X-Com is one of them. I know of the game, and I know it has a great reputation, but I didn’t realize it was held so dearly by so many people. Too bad I suck so bad at RTS games and world-building sims. I can only imagine how terrible I would be playing X-Com, which combines both.