Today marks the 20th anniversary of the Sega Genesis’ U.S. launch, apparently. I’d write something about it at work, but I kind of already did that last year to mark its Japanese debut and don’t have much else to say. And I’m home sick with some kind of sinus thing that’s making the rounds at the office; enough of us are out today that I’m going to put forth a little rumor: IGN is using biological warfare to cripple its competition. You can pass that along to Kotaku or whatever.

Being sick at home with while feeling like a small child made of mucus is trying to force its way out of my skull is a pretty crappy way to celebrate the much more important anniversary that today represents: Six years ago today, I arrived in San Francisco.

I can’t believe it’s been that long. But yeah. The evening of August 14, 2003, I finally let my poor abused Nissan Sentra take a break after a week of cross-country driving and moved my few possessions into an apartment on 23rd Avenue in San Francisco’s Richmond district. I’d been out of work for a long time, I was semi-heartbroken from a semi-breakup, I had exactly no money to my name, and I was frankly doing the old-fashioned thing of moving west to the wild frontier of California and hoping for the best. Of course I had a job lined up, but my new employer (Ziff Davis Media) didn’t exactly have an inspiring track record with its gaming websites, and I was signing up for a tour of duty with their latest endeavor. No one at the magazines liked us or wanted us around, so we had to sit on a completely separate floor from the print group and beg for the smallest of resources. We were managed by executives with no real interest in our success. I spent the first three years of my life here expecting to be laid off at any moment. Surprisingly, that didn’t happen, and now 1UP is the only publication still alive from the once-mighty ZD game group. Depressing!

Anyway, I had a disappointing realization a few weeks ago: I’ve lived here long enough that it no longer seems to inspire me. I’ve been taking San Francisco for granted for quite a while now, which is a shame because it’s a great, interesting city. In order to remedy that, I’ve been taking 30-minute walks at lunch and traveling as far from the office as my tiny little feet will take me. And, more importantly, I’ve been soaking up the sights. Who knows how long I’ll be fortunate enough to live in my favorite city in the world? I want to drink it in while I can. 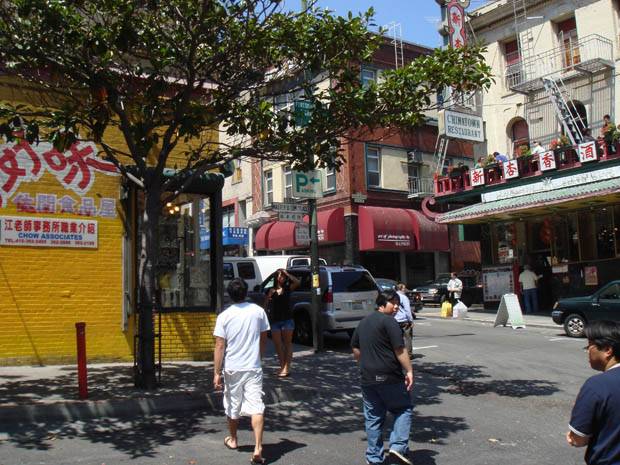 To commemorate my arrival, I decided to start by chronicling where it all began — which is to say, the site of my first real San Francisco memory. The first full day I lived here, I decided to check out Chinatown… I guess because I was familiar with New York City and wanted to forge a comparison? I don’t know. Anyway, as I was exploring the area, I was accosted by the infamous Crazy Roast Duck Man, which immediately made me realize that this city is truly awesome, and every bit as weird as its reputation suggested.

Anyway, that encounter transpired here at the corner of Washington and Walter U. Lum (which is a street, not a guy, although it’s probably a street named for a guy). My return trip this week yielded a startling lack of crazy people, eating duck/pork or otherwise. Just a slightly chubby guy who regarded the photo-taking stupid honky with suspicion. And rightly so! I’m never confronted by crazy people in San Francisco anymore, because they have an inherent sense that I belong here. They no longer faze me, so they don’t bother. I have become a part of the asylum. 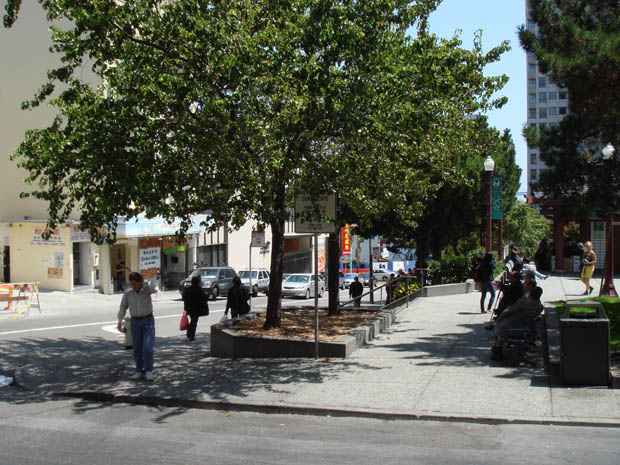 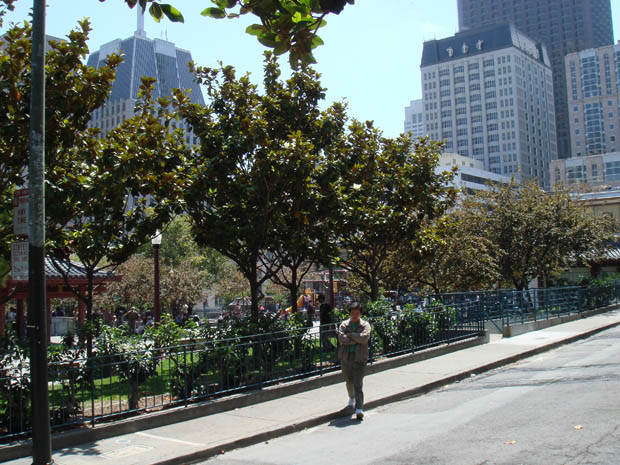 And here’s a second reverse angle looking more along the Walter U Lum side.

It’s actually sort of fitting that this area is so firmly cemented in my memory as my first interesting experience as a San Francisco native, because in many ways it’s an important landmark full of firsts in San Francisco history, too. The corner of Washington and Walter U. Lum is actually the edge of Portsmouth Square, so named because back in the days before they filled in half a mile of the bay with landfill it was right at the water’s edge. It was here that San Francisco’s first school was established, and where the first American flag was placed in San Francisco’s soil — although back then the city was still called Yerba Buena. So, see? Meeting my first raving nutter there was a similarly monumental event, and simply demonstrates the fact that certain locations are destined to be nexuses of history.

And, incidentally, thanks to everyone who has been reading the site since those bygone days. You guys have a lot of patience for a crusty old man for whom every day is a struggle to keep his act together.

16 thoughts on “Six years gone by”