Editorial dreams, they can make you real

I spent yesterday working on GameSpite Quarterly 2, and all but five articles have been edited and placed in the book. After sorting through things (and confirming that the book is only about 75,000 words rather than the 300,000 BBEdit was telling me), it looks like everything will fit into a single volume! It might be slightly over the length of the last book, which means it could end up costing a dollar more, but honestly I’m willing to take that chance. This is the single best collection of game writing I’ve ever read, and I don’t say that out of egoism; I only have a few pieces in this issue. No, the fact is that this issue’s theme brought out the best in everyone — we were all writing about topics we know intimately and have a passion for, and the results are truly exceptional.

It’s a shame it’ll only sell a couple hundred copies (at most), because these essays deserve a wider audience. I guess that’s just the nature of the medicine we’re peddling, and it’s why I’m editing this publication in my spare time rather than under the auspices of a professional publisher. It’s a trade-off of sorts: with great freedom comes great indifference, or some such. Ah well. At the very least, everyone who contributed can tuck one of these into their portfolio and… well, probably not find work with it, as this isn’t the sort of writing that drives traffic. But at least our intentions are good!

In other news, despite having finished up with my Dragon Quest IX blogging for 1UP, I’m still plucking away at the game. This comes as a surprise to me, as I’d intended to set it aside once I’d covered the basics. But I’m kind of addicted, actually. This boils down to three things, I guess. 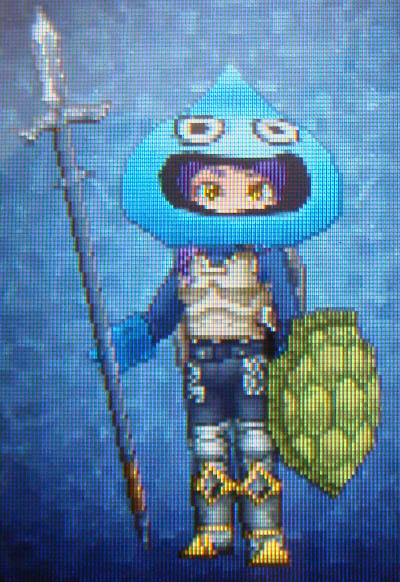 1. Freedom. I’m at a point where I could go and take care of some matters to advance the plot, but I went off-track a bit and opened up an entirely new continent to explore. And there is really nothing I like better in a game than exploration. DQIX has a pretty big world, too; not as vast as Dragon Quest VIII‘s, but still much more sizable than the worlds of the older games. And thorough exploration constantly yields places to mine alchemy ingredients, which brings us to thing two:

2. Alchemy. The ability to roll my own equipment is pretty compelling. I mean, just look at Shiva, here. She’s got a Slime on her head — well, a slime-shaped helmet, but still. Once I realized I was missing a single ingredient necessary to build this bit of gear, I couldn’t put down my system last night until I had procured that last drop of Slime Jelly. And then: presto! Also, her shield and armor both resemble a turtle’s carapace, so she’s half slime, half ninja turtle. I love this game.

3. The Wi-Fi Shop. Every couple of days, you can log on and download new inventory for the game’s wi-fi shop. So far I’ve seen a lot of things I couldn’t otherwise buy: alchemy ingredients, naturally enough, but also much more precious things like stat-increasing seeds and even a Mini Medal. Also, for some reason, I was able to buy a birthday cake last night; I’m not sure why I’d need it, but hey. I confess: I’ve begun taking the time to grind for gold just so I can buy these limited-time items, despite my general disdain for that sort of obsessive behavior.

I think there’s a story or something to the game, too, but who cares about that? I’ve got a slime armor set to complete.

16 thoughts on “Editorial dreams, they can make you real”