Subway sounds, the sounds of complaint

I was listening to Genesis’s The Lamb Lies Down on Broadway the other day and realized, hey, I should write about this. It’s the perfect occasion — the album’s 25 years old! Then I sat down to write and realized I suck at math. It’s actually 35 years old. I guess that makes sense, seeing as the band was on tour in support of it right around the same time I was born. Funny the way numbers interact with one another when your brain is functional enough to process them correctly.

I’d like to assume the GameSpite readership is familiar with my predilection for overblown progressive rock and thus realizes that when I say “Genesis” I’m not usually talking about the band that gave us Phil Collins-flavored pop in the early ’90s but rather the earlier incarnation of said group that produced a number of really great album-oriented rock records throughout the ’70s (often with the guidance, or at least wild-eyed leadership, of Peter Gabriel) and into the ’80s. But this weekend was a stern reminder the makeup of the site’s reader has changed over time. So: Genesis. The pompous ’70s prog version, not the sappy ’80s pop version. (Although Invisible Touch has its share of fine, fine tracks.) They recorded The Lamb Lies Down on Broadway, one of those most inexplicable albums I’ve ever loved. 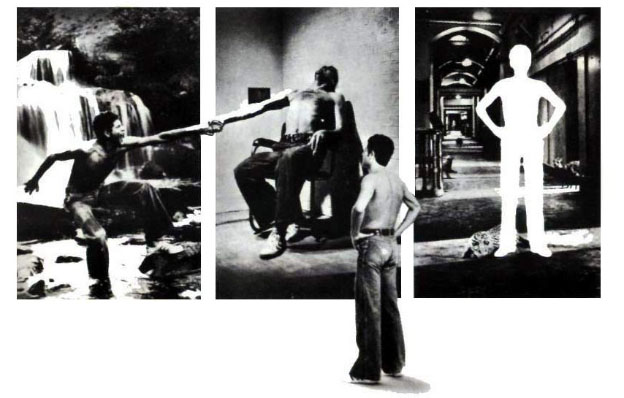 Lamb is a really weird album, and it was certainly made no more accessible to me by the fact that I approached the whole thing backward. I’m old, right, so I was heavily into music long before digital files and sharing; if I wanted to sample music, I had to either know someone who owned it and would make me a tape or else just buy it on faith. And with older albums by moderately obscure bands, the former was out of the question and the latter was difficult since the CD era hadn’t really begun in earnest and British prog rock cassettes weren’t a high priority for record shops to stock in Lubbock, Texas. I really liked the expanded tracks I found on Genesis’s ’80s albums, though, so I would buy my way further backward into their catalog as I had the money and could find copies of the albums. Early on I picked up Three Sides Live, a concert album whose highlight was definitely the intense, hard-rocking, 15-minute medley called “In the Cage/The Cinema Show/The Colony of Slipperman/Afterglow.” I made it my mission over the following year to track down the studio albums on which these tunes originally appeared; two of them were from Lamb, so that was a high priority.

My copy of Lamb (a two-tape release issued in one of those clunky double-width cassette cases that have long since vanished into extinction along with CD longboxes and other such unwelcome relics) arrived on Christmas morning, 1990. It was the same morning that saw Mega Man 3 enter my possession as well. And The Guardian Legend. It was a pretty good haul, in other words. But eager as I was to tear into Mega Man’s latest epic, my first order of business as soon as I was excused from the family gathering was to make a beeline to the dual-tape deck my father had won in some contest or another and listen to Lamb from beginning to end — all 95 minutes.

I was bewildered. I’d had a little exposure to the concept of album-as-narrative before, but generally it was in smaller chunks, not a full hour and a half. To make matters worse, though, I had no idea what the narrative was supposed to be about. Right, Broadway, OK, now he’s talking about Lenny Bruce…. oh, hey, “In the Cage,” which sounds totally weird with Peter Gabriel singing it, and… what’s with these weird sound effects? He’s dying? What? What on earth is a Slipperman? What the hell is going on here!?

See, in the dark and terrible days of back catalog releases on cassette, publishers didn’t bother to include anything in the way of liner notes — just a one-sided slip with the album cover art and a track listing. For the most part, that was just a minor nuisance, since it meant I had to guess at who performed on a given album and improvise my own interpretation of lyrics. For Lamb, though, it was a disaster. Not only was I denied a full listing of the lyrics, but there was also an extensive short story penned by Peter Gabriel printed on the vinyl version’s gatefold sleeve, and it explained the entire album. Well, “explained.” It was hardly the most lucid work (the opening line was “Keep your fingers out of my eye,” if that’s any indication) but at the very least it would have provided some sort of context for the music. Eventually, I picked up a used copy of Lamb on vinyl, but it was a long time coming. Like I said, I went about the whole album backward. 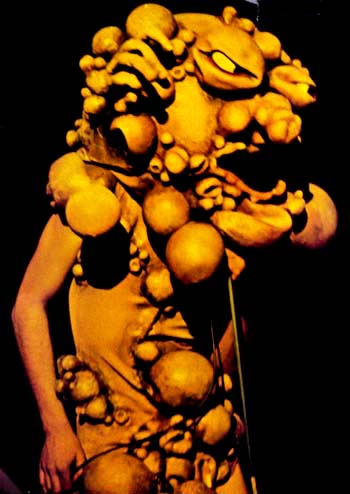 Yeah, Lamb is one of those albums: an hour and a half of confused, dissociative narrative. The band performed it live in its entirety for a year, complete with elaborate changes of costume for Gabriel — most of which prevented him from actually singing. The most notorious of these was the Slipperman costume, which I guess is supposed to be symbolic of STDs or something (the album’s protagonist has an amorous encounter with a trio of lamias, who die in the midst of their tryst, leaving him in this hideous state). Gabriel was usually unable to get the mike close enough to his face in this outfit for his voice to be heard; on the concert version of Lamb the band put out about ten years ago, he had to go back in and redub “The Colony of Slippermen.” No wonder he got kicked out of the band… and no wonder people hate prog rock.

Despite its rather overbearing nature, though, Lamb has some downright amazing music on it. Unlike most concept albums, all but two or three tracks are solid productions that stick in your memory for being either hauntingly melancholy, blisteringly angry, or just satisfyingly meaty. The album even managed to produce an unlikely UK radio hit, “The Carpet Crawlers,” which apparently managed to overcome its inaccessible lyrics and lack of a strong riff through the strength of a beautiful melody sung by Gabriel with steadily building vigor. That’s kind of the album in a nutshell: a mess, but a glorious, compelling mess. The story it tells concerns Rael, a Puerto Rican kid who finds himself swept into a magical underworld beneath New York City, led astray by a blind women and left for dead, only to make out with some lamias who leave him deformed. He restores himself through the magic of castration, but a wild raven grabs the tube that contains his detached private bits and drops it into a river; as he races to retrieve it, Rael is forced to decide whether to escape back to the real New York or save his brother from drowning. He picks the latter, and his brother turns out to be Rael himself. End of album. I’m pretty sure it means something, but since I learned to say “no” from Wally Bear’s gang I’ve never been stoned enough to understand it. Alas.

Great music, though. Truth be told, I still enjoy it more than Mega Man 3.

22 thoughts on “Subway sounds, the sounds of complaint”