The rise of schadenfreude

I’ve been reading reviews of the new Transformers movie with surprising cheer. Now, certainly I’m sad that something which by all accounts is so utterly despicable has earned 4/5 of the total take of genuinely good fare such as Star Trek and Up in the course of a weekend, but there’s no sense in fretting about the vox populi — the vast masses have different priorities in how they spend their free time and free money than I do, and I won’t judge simply because I’m baffled. So it goes. But no, I’m happy that the new Transformers is (by every reliable account) utterly unwatchable trash… simply because it means the new G.I. Joe flick surprisingly won’t be the worst movie of the summer.

That doesn’t mean I harbor delusions about G.I. Joe possessing any particular merits; it’s gonna be so, so bad. But early word is that unlike Transformers it actually has a plot — a plot that more or less makes sense! Not only that, it actually seems to be about the familiar cast of characters that I grew up with rather than relegating them to second fiddle behind America’s least charismatic young star. And I doubt there’ll be much in the way of insensitive, racist humor, since the casting went out of its way to turn guys who were decidedly WASPish in plastic form into real-life blacks, or Egyptians, or even Canadians (that most repressed of minorities). 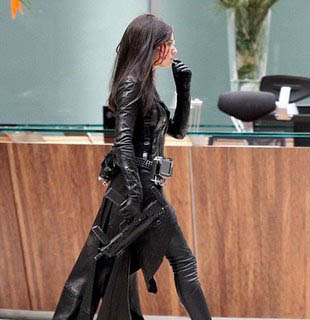 They even got the look right, for the most part. Look at the Baroness! That is pretty much a perfect physical incarnation of the cartoon woman that instilled a strange attraction to Eurotrash in a generation of young Americans. Plus, who can complain about a movie that casts Christopher Eccleston as the main villain? Only a heartless monster, I think.

I was always more of a G.I. Joe fan growing up than I was Transformers — I lost interest in the latter once they started phasing out die-cast metal and phasing in stupid things like the Sharkticons or whatever they were called, while I actually bought the Joe comic right up to the end (albeit entirely out of inertia those last few years) — so it brings me a tiny, meaningless bit of satisfaction to see that it’ll come out ahead on celluloid. Even if it’s all in relative terms defined in degrees of “less horrible than.”

Of course, I’m sure Transformers will smoke it in terms of box office take, but that’s to be expected. You people got no taste at all, you know that?

41 thoughts on “The rise of schadenfreude”