Next in the queue

It’s running a couple of weeks late, but I’m finally putting together the quarterly semi-annual bonus whatsit for everyone who’s been supporting the site with the “remunerated subscription” button that, um, seems to have disappeared from the right sidebar. When on earth did I do that, I wonder? And how did I never notice until now? Well, anyway, the last mailing was at the end of 2008 and, to be honest, it kind of sucked. I’m making up for it this time with something that I think will be much better: 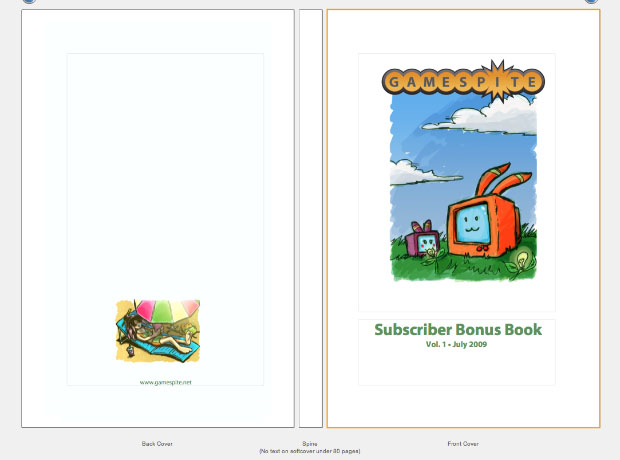 Yeah, I’m actually putting together a small run of books via Blurb. These will compile black-and-white renditions of a ton of the comics that have run on the site in the past, oh, ten years or so. I was going through the ones from 2005-2006 last night and was startled to discover how almost good they were. All I remember about the comics I published round then is that they were all disappointing because none of them turned out the way I had intended, and after half a dozen false starts I pretty much just gave up. In retrospect, maybe that was a bit rash… I was nearly doing pretty respectable work, and with a little more time and dedication maybe I could have pushed through that last barrier between “ambition” and “accomplishment.” Oh well! It’s probably too late now, but at the very least it should make for a nice little mini-book. I’ll throw maybe a dozen newly-created comics in there for laughs, though whether said laughs come from actual humor value or simply from the amusing nature of how badly my drawing skills have decayed in the past three years remains to be seen.

Anyway, please look forward to it, dedicated supporters. You keep this site alive, because servers are expensive.

12 thoughts on “Next in the queue”