By a happy coincidence, everyone who writes for 1UP has his or her own beat, so to speak — that is, particular types of games they know well and tend to cover at events. Considering we’re down to a skeleton crew (thanks, housing bubble!), that works out pretty well for us. You’ve probably noticed that (when I’m not just writing about old stuff) my beat tends to center around Nintendo and Square Enix, which is why I spent 90% of my E3 time either in those companies’ booths or talking to their people. And why that infectious New Super Mario Bros. Wii theme was stuck in my head for a week.

Being so immersed in those specifics, I was only able to take a cursory glance at what everyone else had on display for the show. I saw just enough to assure me that I needn’t feel as disenfranchised by the medium as I have for the past year, because even amidst all the massively hyped, adolescent pandering of the industry’s God of War IIIs and Bayonettas are tons of interesting, creative, inventive, appealing works. You have the obvious selections like critical darling Scribblenauts, but also a sequel to the merely-pretty-good New Super Mario Bros. that somehow looks a lot more fun than the sequel to the sublime Super Mario Galaxy, a Final Fantasy Crystal Chronicles game I’m actually looking forward to playing, and the first-ever survival horror game I can’t wait to experience.

Most gratifying, though, was the realization that Nintendo deserves a “Most Improved” ribbon for their showing this year. The company’s releases tend to be pretty divisive of late, with long-time fans feeling abandoned amidst shouts of “non-games” and “casual nonsense” and other such epithets. There’s a real us-or-them mindset about Nintendo, at least from fans, but at E3 I feel the company proved that those distinctions are arbitrary at best, completely erroneous at worst. Listening to executives and designers speak made it clear that they recognize the different needs of different groups, but don’t necessarily find them mutually exclusive. NSMB Wii is the embodiment of this concept, taking a game (Super Mario Bros.) that everyone knows and everyone loves, regardless of demographic, and creating an expression of that series that can be played, simultaneously, by the full array of its fans. They tried for something like that with Mario Kart Wii, I think, but that was a frigging mess. NSMB Wii, on the other hand, totally nails it. 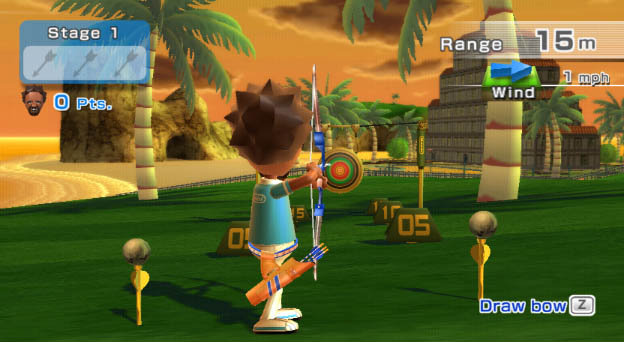 Wii Sports Resort nails it, too. You know, I’ve never even played Wii Sports — nothing about it interested me, and for some inexplicable reason people are willing to pay $40 for a free pack-in title on eBay, so I sold my copy last year. But the sequel looks excellent, from what little I’ve played: the archery event is phenomenal, and the kendo portions are great. (The 100-man standoff, which I’m calling “O-Mii-Chanbara,” looks like the realization of something Bushido Blade attempted but did poorly.) Sure, I can’t help but wish I were doing the archery in a Zelda game — which will happen in due time — but even here, in the context of standalone athletic events, it’s incredibly addictive.

Between those two games, you have the whole of Nintendo’s strategy, which is transcending boundaries and groups and demographics with games that appeal to everyone. Mario reaches out to the casual player from the company’s history of traditional games, while Wii Sports Resort beckons the long-time fan from the shores of pleasant, lightweight, universal gaming diversions. They may be coming from different places, but the end result should be the same: a good time to be had by all.

The fact of the matter is that Nintendo’s been doing this all along. When it “abandons” gamers to create things like Wii Fit, it’s not as though the company’s developers have suddenly forgotten that they have a long, storied tradition of making videogames. On the contrary, they incorporate that legacy into works that their fans dismiss. I’ve put in quite a bit of time with Wii Fit this year, and I’m constantly impressed by how much it draws upon 30 years of Nintendo’s game development heritage. Wii Fit may not be everyone’s idea of a videogame, but it makes use of gaming’s vocabulary and the underlying Nintendo philosophy. No one else could have made Wii Fit, because no one else approaches games in quite the same way.

I’m not even talking about all the balance games, which blatantly are videogames (and pretty fun ones, at that). No, I mean that Wii Fit itself is fundamentally structured like a traditional videogame. You have a goal to aim for — 22.0 BMI and perfect left-right body balance — and both positive and negative interactive feedback to chart your progress. You can designate interim goals on the way to that final elusive victory, progressive weight-loss milestones undertaken against a timer, which really isn’t so different from trying to complete a level of Mario before time runs out. There’s plenty of repetition, but surprising little variances constantly appear within the routine to keep you on your toes. Even the startup theme at the Wii Menu — the six-note motif when you select the Wii Fit disc channel — calls back to Nintendo’s classic games. It’s the opening bar of the town theme from Zelda II, you see.

I can’t really take issue with what Nintendo’s doing with things like Wii Fit. Sure, not everything they do these days interests me, but the contention that a game or product doesn’t have the right to exist because it doesn’t cater to you is the worst kind of egocentrism. It’s a mistake I make sometimes, too, though being at E3 reminded me how myopic it is. I may not have much use for the big, massively-hyped games, but they have an audience, and people are still making plenty of things that do interest me. For their part, Nintendo’s simply using a finely-honed sense of game design in new ways, and even when their efforts don’t pan out, at least they’re still putting that experience to use. And sometimes, those new applications do come in handy; Wii Fit has been a big part of my losing 40-plus pounds over the past year and getting back into the physical shape I was in back in college. And through all of this, I haven’t made much use of the core software — I got sick of the actual exercises after about a month and decided to use that workout time for walking down the hill to the beach instead — yet I still boot up a few times a week to check my overall progress, which keeps me mindful of how I’m eating and exercising. This was, in fact, Shigeru Miyamoto’s stated goal with Wii Fit when I interviewed him last year before the product launched; he didn’t presume the game itself would make people healthy, but that it would become a tool for anyone interested in having a healthier lifestyle. And it uses gaming language to do it, with its goals and fanfares and Zelda music and minigames and talking Balance Boards.

I feel so bad when I let the Balance Board down. He only wants what’s best for me.

So yeah, maybe I’m just at a different point in my life than most people who follow Nintendo closely — I’m fine with non-game applications and works designed for people who aren’t me even though I like the old-fashioned “hardcore” games a lot too — but I looked around the company’s E3 booth this year and I was really impressed. Their efforts to bridge the great divide between two different audiences have been hit or miss, but this year it felt like they really had it down. And, you know, they still had Sin and Punishment II and Metroid Other M for the people who cry about abandonment and loneliness on message forums.

45 thoughts on “Bridging the great divide”