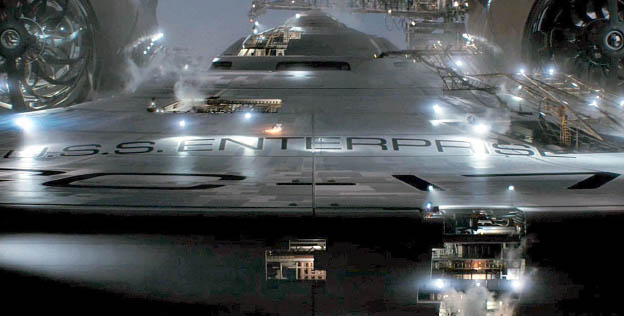 I don’t find myself becoming excited for much in the way of media releases these days, be it books or movies or games or albums or what have you. But Star Trek seems to be the exception to the rule. Not that it surprises me — I’ve been waiting for this movie for 20 years or so. I had the poor timing to become a Trek fan right after Star Trek IV, which meant that all my anticipation built up to… Star Trek V. And the first season of The Next Generation. Oy. Nicholas Meyer had the good grace to make sure The Undiscovered Country was a worthy send-off for the classic crew, but then Generations went and crapped that up, too.

I seem to have pretty bad luck with fandom, frequently getting into something just before it goes sour. I turned into a prog rock maniac in the early ’90s, getting into bands like Yes and Genesis and Rush and Emerson Lake & Palmer right before their dire early ’90s “right, let’s bang one out for some easy money” releases. Yes’s Union is definitely the Star Trek V of prog rock. Maybe that’s why I’ve ended up writing most about games — having grown up right alongside the medium, I’ve been able to jump onto great franchises on the ground floor. Like the bands and movies I’ve enjoyed, the likes of Castlevania and Mega Man have seen better days… but I was there for those better days, and as a result I don’t feel like someone who arrived at the party right as the DJ quit playing and the food ran out.

Anyway, I’m looking forward to the new film — which I’ll be catching tonight, and probably a few times down the road — because it’s being almost universally hailed for achieving the seemingly impossible task of being a good general-audiences work while working for Trek nerds as well. Crazy, right? It’s like that episode where Captain Kirk brokered peace between the guys who were half-white, half-black and their rivals who were half-black, half-white. Or maybe not. All I know is that I’m ashamed for even writing that.

Which begs the real question: how well does the movie work for people who really love Trek, but have the good grace to be embarrassed about it? I suspect it’s going to make us the happiest of all.

13 thoughts on “Across the universe”