So it’s been about a decade since the first Star Wars prequel arrived and promptly failed to live up to that amazing teaser trailer we all watched a few dozen times in anticipation of the movie, but something even more important happened ten years ago today: this site launched. Well, technically, I started the site sometime in 1996, but it was a pitiful little thing on GeoCities that I could barely even update sometimes thanks to GeoCities’ terrible servers. After a couple years of that, I decided that maybe I enjoyed this webmastering thing enough to pay a little money to put the site on a more reliable server. 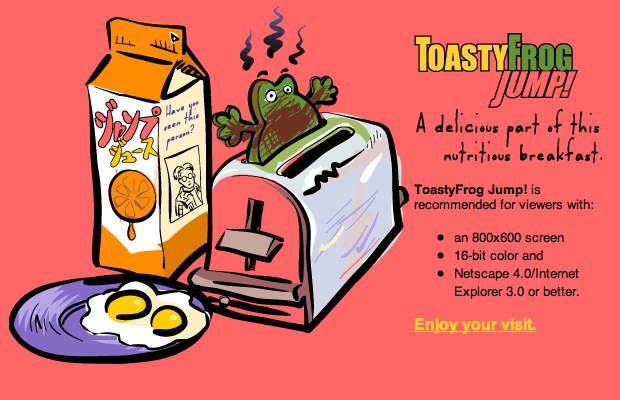 It was money, server space, and time enthusiastically wasted.

We’ve managed to wrangle it into something interesting over the years — right about the time I started pretending that toastyfrog.com doesn’t work — but at the start it was pretty dang worthless. It was loaded with dumb game reviews intended to annoy fans, a Lunar “strategy guide” which was mostly a lot of stupid jokes, and assorted media coverage. Worse, for some reason I decided the site’s visuals should be a riff on Japanese comic magazines like Shounen Jump, which I can only assume I thought was a good idea because frogs… jump. Yeah, I dunno. Anyway, I wanted the site to have the same hyperactive design as the magazines it was named for, but since the web didn’t easily let people plaster their sites with all kinds of dense, glaring Japanese text, I settled for using eye-searing colors and random (sloppy) bits of katakana instead, hoping it would all sort of average out. In retrospect, it was a colossal failure, because it was a clumsy attempt at a visual joke that no one else knew I was trying to make. And thus the tone of the site was irrevocably set!

On the plus side, I’m still pretty happy with the obligatory link banners. Remember banners? I kinda miss ’em, truth be told.

And just think, if anyone else had bothered writing about the Chrono Cross demo when it arrived in Japan, this site would have eventually died in obscurity because the GIA wouldn’t have bothered linking to it. Man, no wonder people hate that game.

Anyway, thanks for continuing to subject yourselves to this prattle. The millions of unique daily visits this site has received in that ten years — currently about 3,000 per day on average — continues to surprise me. I gotta say, though, if I’m still doing this in ten years I’m going to be a little worried about myself.