GameSpite Issue 14 has been cancelled

It’s like this: when I was first hired at 1UP, I was excited to have steady work, sure… but I was even more enthusiastic about the fact that I’d be working at the company responsible for the last few American game magazines worth reading. I’d always wanted to be a published author, and working with GMR, EGM, OPM et al. gave me that opportunity. Needless to say, I watched the magazines die one by one with grim disappointment, and when they finally pulled the plug on EGM I was crushed. The death wasn’t a surprise, of course. I don’t know if the gaming press can realistically sustain a healthy print arm anymore, at least not in the U.S. Distribution costs here are too high, the audiences spread too far apart, tastes too diverse. Even in the U.K., Edge only exists because it’s a bragging point, and the Japanese gaming press (minus niche publications like Continue) is basically 300 weekly pages of mild pablum carefully vetted by game publishers’ PR agents.

No one’s going to make a profit printing game magazines in America these days. But at the same time, I really miss print: I miss the substance of physical media, and I miss single looming deadlines, and I miss pages of content without animated roadblock-style Flash ads bordering them. No one’s going to make a profit publishing a game magazine, but I realized we can do it here without a loss, and that’s good enough. I mean, I already make a living doing online game writing for a company that has no interest in taking us into print, and this site already has lots of great content that will eventually be bundled into collected print volumes. So we’ve decided to reverse the process a little and do print first: thus, GameSpite Quarterly, Issue 1. 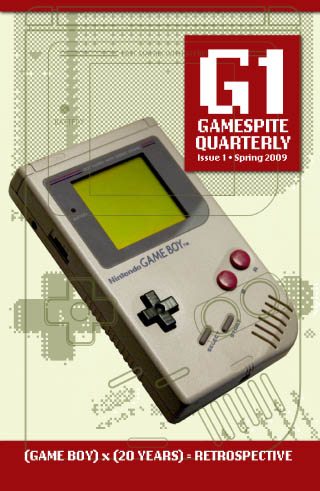 We’ll still be posting content online, though. In fact, there’ll be some articles that only appear online. But instead of publishing web content first and then compiling it into print, we’re going to do it backward and write for print, then post that material gradually online. We get to write themed content for a set deadline with a really nice end product in-hand, and you get the same writing as usual with the option to grab it all in one go.

I’m using Japan’s Continue magazine as our model, here: every quarter they publish about 150 pages of niche content in a small squarebound format and charge $10 for it. We’ll be doing roughly the same — maybe each issue won’t be quite 150 pages, and maybe it’ll cost a dollar or two more, but the content will definitely be niche, and we’re ultimately sticking fairly close to Continue‘s overall style. I’ve learned a lot from GameSpite Year One, Vol. 1, including “don’t distribute the magazine myself” and “work in smaller increments as opposed to a single 350-page volume.” I’m mailing out the last handful of hardbacks this weekend, finally, and there’s no way I’m subjecting myself (and you) to that mess again. All orders will be purchased through and shipped by blurb.com, thanks very much. I’ll post all necessary info for interested parties once the issue is ready to go up for sale. And again, just about everything in the magazine will make its way onto the site; the book format is just for people who, like me, still have a fondness for paper.

As you can see, the first issue will be covering Game Boy’s birthday, which admittedly you may be sick of after our 20th anniversary blitzkrieg on Retronauts. I think this will be different, and worth reading, though! But then, I’m biased.

We’re still wrapping up the magazine. Text will be finalized this weekend, and layouts will be completed the week after, and then it’ll take a while to get a proof copy and make sure the issue is distribution-worthy. Orders will be opened only once the magazine is edited and ready to ship — no preorders, no delays. I figure you should have your copy in hand by the time E3 rolls around, and then we’ll get to working on the second issue.

I should probably be spending my free time on weekends doing something besides more of what I do at work, but I can’t help it. I miss print. This little endeavor won’t change anything; it certainly won’t turn the tide of game writing away from traditional media. But the project has been fun to plan and create, and while we’ll probably just sell a few dozen copies, we’re really not in it for the money… just the egoistic satisfaction of seeing our names in print.

Anyway, that’s what we’ve been doing with our free time lately.

This is not a news magazine; it not intended to fill any void left by EGM except the one in my arrogant need to see my name in print. It’s a quarterly journal printing the same kinds of articles that already appear on this site every week. Think… McSweeny’s, but without as much ironic post-hipsterism. Also, I don’t want it to conflict with my day job. To that end, it won’t include any advertising, and I’m not going to be promoting it — it sells what it sells, and if it doesn’t sell much, that’s fine. That’s not why we’re doing this.

We’ll still publish collected volumes of the existing content; I hope to have the next out over the summer, time permitting. And the first book is permanently available if you click the little picture of it in the upper-right corner of the site. See? Right up there.

Edit Again: People seem to be making a bigger deal of this than it actually is (i.e. Kotaku). Nothing’s really changing; this book is nothing more than the collective, weekly-ish game musings that have been posted here over the past two years, but now they’re simply being bundled into print before going online. I’m a little nervous that what is supposed to be a small side project seems to be gathering so much attention.

54 thoughts on “GameSpite Issue 14 has been cancelled”