I have a sad confession to make: I was supposed to review Suikoden Tierkreis for work, but…the game defeated me. Not in the sense that the difficulty was unmanageable — far from it, as the portions of the game I played were so simple and unchallenging that I just let my party autobattle its way through all but one fight. And that one fight was a gimmicky tutorial battle that required a modicum of tactics, i.e. “use magic.” I doubt Tierkreis ever becomes unbearably difficult, in fact, as the game is obviously and painfully geared toward children. And that was what beat me in the end. I hate to see the Suikoden name reduced to preteen-friendly tripe like this. 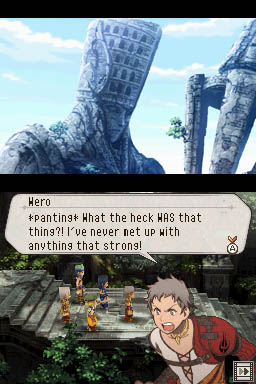 I don’t have any particular emotional investment in the Suikoden series; as I’ve mentioned before, the games made a clumsy and painful transition to 3D, so I haven’t spent much time with any of the games since the (completely incredible) Suikoden II. Tierkreis actually goes a ways towards restoring some of the things I liked about the early games, such as the pacing of the battles; they’re quick, with little excessive animation, no loading times to speak of, and, even better, lots of overlapping character actions as fights play out. The sluggish tedium that has festered in the series’ battles since Suikoden III is almost completely removed. That’s good!

But: the quick pacing was only one aspect that made the early games so appealing. I also appreciated the unique feel of the story, and in that sense Tierkreis has nothing to do with Suikoden. I’m not complaining about the parallel world aspect of the story, or the lack of True Runes, or the absence of familiar series touchstones, because I don’t have enough interest in the series’ lore to care about any of those things. I’m talking about the tone: Suikoden and its sequels have always done a remarkable job of bringing you right into a world fraught with political turmoil and young heroes whose youth doesn’t translate into frivolity. Despite the fact that, say, the hero of Suikoden II is a kid in a youth brigade with a ridiculous spaz for a sister, Suikoden II didn’t waste any time on zany kid adventures. The game kicked into gear immediately with the betrayal, ambush, and slaughter of the hero’s entire company and a harrowing midnight run for freedom. Even the first game, which started out in a happy-happy world where the hero was a pampered son of a war hero living in luxury, didn’t dicker around with mindless banter — it set up its characters and situation quickly and breezily.

That is where Tierkreis fails. I spent two hours with the game, and they were excruciating. The tale begins with a lazy hero in stupid clothes and his friend/rival and his nagging big-sister-like female pal and a big lug whom everyone looks up to and the hero gets nagged at for sleeping too late and also by the way he’s an orphan and oh god it’s the intro of every boring mid-grade RPG since Star Ocean and I wanted to use a melonballer to gouge out my eyes every time the game forced me to stop and listen to the characters’ idiot blather. Which is constantly, by the way. Like so many RPGs with such an utterly generic beginning, Tierkreis stops you at practically every single new screen to assault you with more empty setup. I don’t know if this is because the developers assume gamers are all morons who can’t piece together what’s happening without having exposition to spell out every minor detail, or if they’re all too aware of the awfulness of their premise, plotting, and characterization and try to overcompensate by giving the characters lots to say so that it’ll totally look different from that latest externally-developed Tales game, honest! The result, of course, being that this all simply serves to highlight the wretchedness of the whole affair. By the time I reached the setup for the core plot, I had an hour and a half on the clock — an interminable 90 minutes broken into 15-minute chunks, because being exposed to the game for any longer than that made me nauseous.

It sure didn’t help that the game’s so hideous. Well, partially hideous: the character designs are bad, but they’re nothing compared to the character models, which look like a bunch of tiny sasquatches stomping around while wearing cardboard boxes all over their bodies. The battle animations especially made me cringe, because the game moves like the old Suikodens, but the 3D character models actually have less animation than the old 2D sprites. Every time I saw a character float inanimately from the back lines to stiffly hit an enemy, a little piece of my soul shuddered. Worse, the models are a stark contrast to the backgrounds, those beautiful 2D paintings full of detail and light…but even these wear after a while, because to save money or whatever, these lush hand-drawn backdrops repeat, which leaves you wondering if you’ve run in circles when you stumble upon a exact same branching forest path you were just running through a few minutes ago — but no. It’s just that this forest inexplicably has two areas where the paths fork into the same three branches around the giant rotting log. It’s a miracle of nature! Or a miracle of limited cartridge space, maybe. Although the backgrounds are not nearly as painful an example of this as the voice “acting,” which Konami decided to include in the game despite the format not really lending itself to full voicework. That stuff takes memory, you know, and the DS isn’t exactly bursting with extra space. So not only are the sound files compressed to death to fit it all in, the actors don’t really perform so much as they blurt the entirety of their dialogue as quickly as possible. This somehow manages to make the stale and uninteresting text even more stilted and lifeless than it is in other similarly generic games.

There is, of course, no option to turn the voices off. Konami wants you to suffer through every excruciating moment of this game, presumably working under the assumption that you’ll eventually be gripped by Stockholm Syndrome and grow to love this monstrosity that exists only to torment you.

So, that’s why I’m not reviewing the game. I can’t get past the sheer idiocy of the whole thing, the almost ritualized mediocrity that so many Japanese RPGs seem to suffer from. I don’t think I can review games like this or Star Ocean 4 fairly; they commit the gravest crime of all — wasting my time — and I hate them. I’d say it’s because I’ve outgrown the genre, but given the slate of games I’ve been playing and am looking forward to, I don’t think that’s really the case. I still love RPGs, especially when they’re portable. But many games in the genre increasingly suffer from — well, I’m not sure what the suffer from. I think from publishers and developers wanting too much: they want to create big-budget experiences without actually investing a big budget, so they fall back on shortcuts and clichés and sustainable mediocrity rather than coming up with creative workarounds. But if that’s really the case, they don’t seem to realize that the results are still the same as if the creators simply didn’t care at all. What a mess — and what a shame that the Suikoden series, once so unique, is ultimately reduced to the same drivel as the likes of Beyond the Beyond — the game that the original handily whipped on its own terms.