[[image: ar_031109_dqv_02.jpg:Core blimey!:right:0]]So I’ve finally had a chance to put in some quality time with Dragon Quest V: Hand of the Heavenly Bride, and unsurprisingly, I’m enjoying it quite a bit. This is my third DQ game, the others being Dragon Quest VIII (which I loved) and VII (which…well, I didn’t finish because it dragged on too long). Third time’s a charm, as they say, because I think I finally understand a key component of exactly why the series is as loved as it is.

Of course it’s no secret that, if nothing else, DQ’s appeal (particularly in Japan) these days is that of a comfort food; everyone likes it and everyone’s familiar with it, so when you start up a new one you smile, rather than complain that there’s yet another casino. You’re simultaneously looking forward to the new stuff while being gently guided by familiar trappings. Now that I have a few DQ games under my belt, I’m finally seeing that mechanic come into play. But Dragon Quest as a series had to do something right to help it achieve that sort of appeal in the first place, something other series haven’t quite gotten the hang of. Without going into spoilers, I’ve already witnessed several genuinely happy plot events, something most RPGs tend to save for the lighthearted beginning or the post-last boss extravaganza. Mulling this fact over was what turned on the light bulb: people love Dragon Quest because it has such a good grip on the concept of positive reinforcement.

Every Dragon Quest game is built to please the player as efficiently and as often as possible. With generous experience given for each battle – which isn’t taken away, even if you die – it’s uncommon to go more than a few fights without hearing the level up fanfare. (This is even more pronounced in DQV, due to the high number of party members…no wonder it’s so highly regarded.) Furthermore, the stat increases for each level have a significant impact, meaning even seemingly difficult areas can be overcome with a small amount of grinding – which, in turn, doesn’t feel like much of a grind because battles usually last 30 seconds or less. Combine this with a simple – but not dumbed down! – battle system, and you have a game that’s rewarding players at every turn. It’s like the RPG equivalent of Peggle. (Or, rather, Peggle is the brick breaking equivalent of Dragon Quest, but I digress.) 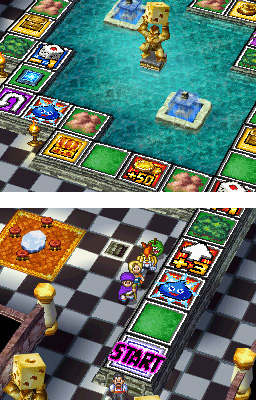 Of course, the other major school of thought on player rewards – commonly found in games like Viewtiful Joe, Ninja Gaiden, or the Shin Megami Tensei series – is that a reward is that much more worth it when you’ve earned it. There’s nothing wrong with that, and one could certainly argue Dragon Quest provides this as well in the form of a few tough bosses or dungeons, but now more than ever I’m convinced that DQ’s popularity is due to something else. It’s the meticulously careful balancing of providing constant rewards with long term achievements that, to this day, separates Dragon Quest from the other games that follow in its footsteps. Other RPGs, even non-sequels, often struggle with feeling tired and clichéd, while DQ – historically a series incredibly guilty of retread – gets a free pass every time, and I finally understand exactly why that is. When I fire up a new DQ game, I simply know I’m going to be (mostly) smiling from start to finish. I know the game is never going to punish me, and I know that – unlike some of its imitators – it’ll never feel like work when I’m playing.

And sometimes, that’s all I need to know.