The first trailer for the upcoming Hollywood adaptation of G.I. Joe has hit the Internet, and it is…awful. Execrable. Embarrassing. A disgrace. This is, as it should be.

I suppose this is where a certain percentage of 30-something man-children revert to a feral state and begin snarling about how such-and-such a person/group/entity is sexually violating their childhood, but let’s not be silly. Much as I enjoyed the Joe cartoon before growing old enough to know better, much as I loved Larry Hama’s comic book adaptation before the ineffable hand of Hasbro demanded he do less intricate storytelling and more selling of their neon-colored missile-launching toys, the rumors (floating around even way back then) of a live-action adaptation made me roll my young (and too sheltered to be cynical yet) eyes. How could an adaptation of a toyline that featured such winners as Ice Cream Soldier, Skidmark and Raptor the Flying Accountant be cast with live humans and not be ridiculous? It can’t. Of course, it’s 20 years later, so instead of ugly cartoon-style costumes and bad bluescreen effects we’ll be getting ugly X-Men-style costumes and bad CG effects. Plus ca change….

This whole thing is happening, of course, because of the equally abysmal Transformers, which stunned me and pretty much anyone with a fondness for quality entertainment by becoming a massive blockbuster. There’s no way this one will fare equally well, of course — even if the national zeitgeist hadn’t turned away from war-as-policy in the past year or so, there’s surely only so much poo you can pile on the public before it shakes its collective self and hits the shower. I feel kind of bad for everyone attached to this product, except maybe Dennis Quaid, who’s old enough to know better. I’m sure the only one who’ll come out of this disaster untarnished will be Ray Park, because (1) he’s playing Snake-Eyes and gets to wear a mask the whole movie and (2) Hollywood always needs limber physical actors for its crappy blockbusters.

That being said, I’ll definitely be going to see the movie. Maybe even opening weekend! I have no interest in actually watching it, but I figure I need to repay the girlfriend for her, er, kindness — she’s expressed her intent to take me to see Twilight despite my naked horror at the prospect. I figure taking her to see this year’s worst movie seems a fair trade for being dragged to what is widely regarded as last year’s worst.

And in the meantime, my nostalgic love for the G.I. Joe toyline will continue unabated, because I understand what it’s really about: 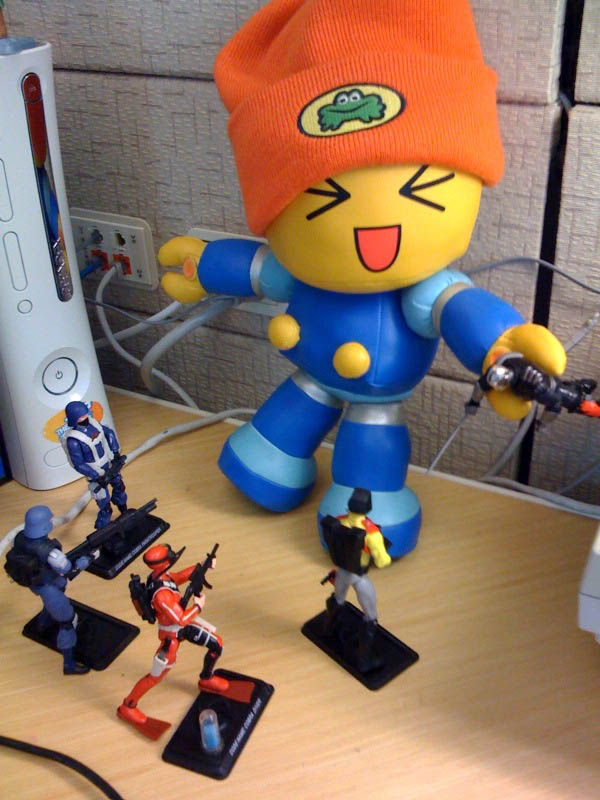 Cobra commandos trying to rescue Destro from Parappa the Super Servbot, of course.