It’s 2009, but I’m not done with this 2008 thing yet. Because apparently my new modus operandi in life is to run behind with all the things I schedule for myself. Although I suppose it’s not always my fault — for instance, I was planning to mail out the first batch of GameSpite Vol. 1 yesterday, but the fact that it was pissing rain put a crimp in that plan (since said plan involved toting open boxes of books in paper envelopes five blocks to the post office). And so I run slow, as ever, with reviewing my reviews…or non-reviews, as in this case. 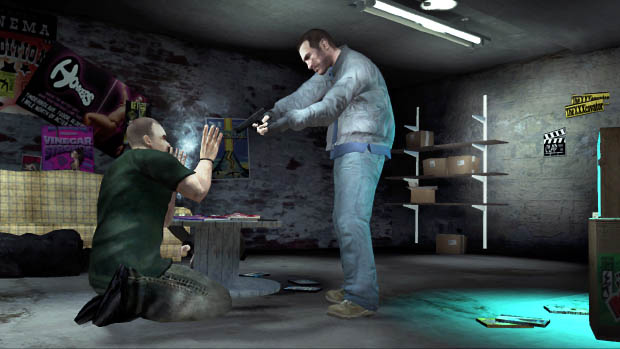 I started writing this entry while I was at my sister’s house watching my brother-in-law play Crackdown. This made me sad for two reasons. One, because he was the one playing Crackdown, not me, and Crackdown is the sort of game that’s far more entertaining when you’re the one at the controller. And two, because I was writing about Grand Theft Auto IV, the latest in a series that was far more entertaining before its creator split off to go create Crackdown.

GTA is one of those series that used to strike me as self-consciously crass, a naked attempt to gather attention through juvenile shock value and amateurish parody. Which it is! But once I actually tried GTA III, I realized that all of those things are a distraction from GTA’s real point, which is freedom. DMA Designs’ created in GTA a giant, city-shaped playground with lots of fun toys for creating mayhem, encouraging violence so over-the-top and unrealistic that it ceased to be objectionable and became simply fun. And though GTA III did offer a definite story-driven progression through the game, no one really cared: the only thing the plotline really accomplished was to unlock new areas and new toys. GTA’s brilliance lay in the fact that it was entertaining no matter how you played it — even if you went about it completely wrong, in fact.

Unfortunately, somewhere along the way that original vision was lost, and with GTA IV the entire series’ purpose has been inverted. Now freedom is a secondary consideration, and the amateurish plotline and heavy-handed parody/homage/rip-off are the point. That’s a shame, because those have never been the series’ strengths…much as its creators would like to think so.

GTA IV’s shortcomings are subtle and not immediately obvious, which makes them all the more frustrating. They only grow apparent with extended play, which is why it took me a good 30 hours to finally become fed up with game and shelve it. 30 hours is how long it took for me to realize that the little nagging irritants were never going to go away, that I’d never be allowed to simply enjoy GTA IV the way I’d enjoyed its predecessors, because Rockstar was more concerned with impressing their amazing writing on me than they were with giving me an open world to enjoy.

This isn’t to say GTA IV doesn’t have an open world. On the contrary! Its condensed version of New York City is detailed and gorgeously realized. It’s also stultifyingly dull — although that fact isn’t immediately obvious, because most of the city is partitioned off and you’re usually occupied fielding all the nonsensical busywork the game throws at you when you’re not on a mission. Somewhere along the way, Rockstar got it in their heads that what gamers really want from their prize franchise is a sort of ultra-violent version of The Sims, so antihero Nico Bellic spends most of his time being nagged at by clingy, unlikable friends or being goaded into having tepid online romances with female cutouts whose personality profiles read like a compilation of every discarded joke dredged from the cutting room floor of Married…With Children. You’re technically free to go anywhere and do anything you want, as in previous GTAs, but the difference is that this time you’re not allowed to enjoy it. Managing Nico’s social life is an expanded version of the annoying gang wars in San Andreas, except that the turf wars were only a minor portion of Carl Johnson’s adventure and went away once you left Los Santos. Nico, however, gets more and more guilt-inducing phone calls as his story progresses and more and more deadbeat idiots cling to him. Want to go find amazing automobile jumps, round up the obligatory collectables or just cause hilarious mayhem? Fine, but Rockstar is gonna make sure you feel guilty about it. They paid a lot of money for those voice actors and boring comedy routines, and by god you’re going to sit through every scrap of incidental dialogue or else you’re going to be reminded every few minutes that you’re a horrible, neglectful person. Meanwhile, the city itself lacks much in the way of interesting things to do — stunts and jumps are difficult to find — and the focus on more realistic road systems makes getting around a real hassle. An uninspiring hassle. Too much emphasis is placed on a few major cross-town arteries, meaning players traverse the same boring roads and pay the same stupid tolls over and over again, while the side streets offer little compelling reason to explore them — and plenty of nagging disincentive to make the effort in the first place.

If the GTA series has had a single debilitating flaw since its inception, that flaw has been the weird disconnect between missions and everything else. Missions tend to be boring, or frustrating, or else focus too much on underdeveloped gameplay mechanics. The greatest hope I’ve had for the franchise is that Rockstar would bridge that divide and make the missions more consistent with the open world joy that surrounds them…and GTA IV does move in the direction, sort of. But it goes about it all wrong. Rather than making the missions as good as everything else, GTA IV makes everything else as dull as the missions. And the missions are even worse here than usual — repetitive, unimaginative, and drawn out.

Worst of all, the game’s compulsory missions are a poor fit for the compulsory story. The game begins with Nico lamenting his sins and hoping to make a clean break from his murderous past by coming to America…where he promptly begins killing all sorts of schlubs like it ain’t no thing. Every once in a while, players are given a prompt that can allow them to spare a life, but these few opportunities seem awfully hollow when you’re gunning down cannon fodder goons left and right with nary a compunction. Nico has incredible potential as a character, but it’s utterly squandered: he’s a cipher, an amoral blank who treats his friends, family and lovers like crap yet sits in surly judgment of everyone he meets. He trots out his sob story as the plot dictates, but his supposed regrets seem to have little bearing on his actions.

I’ll say this for GTA IV, though: it probably is the closest thing gaming has ever seen to a Hollywood production. Not because of its production values or Oscar-worthy writing, though. Rather, it’s video game as subpar Tarantino flick: it goes over the top with its violence and crassness, but ultimately is too bloated by its own smirky, self-satisfied sense of cleverness to transcend its failings and justify its excesses. Somewhere deep inside GTA IV is a real Grand Theft Auto game struggling to be free, but that masterpiece of gaming is imprisoned by myopic mandate of corporate overlords who don’t really understand why the billion-dollar property they inherited was so brilliant to begin with. Utterly disappointing.